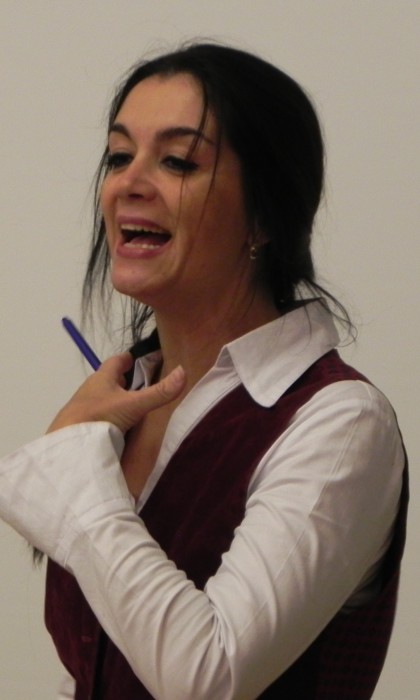 Valeria Palumbo, a Roman by birth and a Milanese by adoption, is a journalist and historian of women.  She says of herself: “I have spent almost thirty years with the press, television and the new media, convinced that only correct information makes a country free and civilized.”.  She adds with a touch of bitterness that she has not won the battle because the newspapers which she loved the most and of which she has been the central editor-in-chief, L’Europeo and Global Foreign Policy, have been closed down.

Today she works with newspapers, with associations defending civil rights and cultural heritage, writes for various websites and on-line periodicals, teaches in universities, writes theatre texts and runs courses and meetings at festivals of history and  literature.

The theatre, together with journalism, is her great passion.  “But then, of course – she adds – there is literature, art, music, going for walks, history…”

Valeria Palumbo is a member of the Italian Society of Historians and of the Italian Society of Writers; in recent years she has written some dozen tales about the history of women.  The first was Prestami Il Volto (“Lend me the face” – Selene 2003), which won the prize Il Paese delle Donne (“Women’s Country”) in 2006.  The last one was Geni di Mamma (“Genius mothers” – Odradek 2013).  In between, so many other stories of extraordinary and extremely interesting women, from Matidia, the mother-in-law of the Roman emperor, Hadrian, in La Divina Suocera (“The Divine Mother-in-law” – Castello Volante 2010) to the “Alpha Girls” of the third wave of feminism in L’Ora delle Ragazze Alfa (“The Alpha Girls’ Moment” – Fermento 2009, a prize-winner in 2010 in Anguillara Sabazia, city of art). 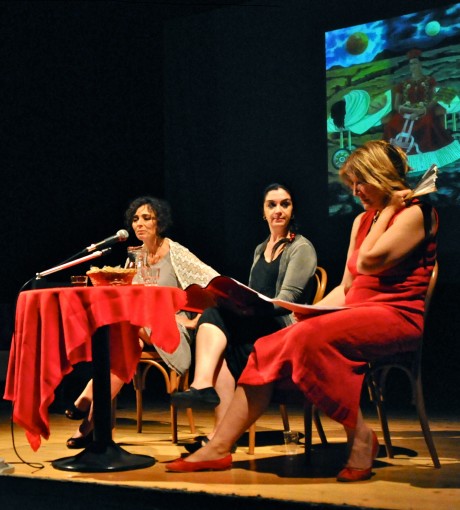 Valeria Palumbo is also the author of Quando l’arte ha nome di donna (“When Art is called Woman” – Cendon Libri 2013), a theatrical tetralogy in which the vicissitudes of four artistic groups are re-enacted.  But what she likes best of all is to bring her theatre to the public.  And so it happens that she tours Italy with other adventurous companions to recount forgotten events, often in beautiful spots kept open by the volunteers in the Touring Club. In the adjacent photograph she is seen with Sonia Grandis and Francesca Fenati in Diego, la rivoluzione e altri incidenti (“Diego, the Revolution and other Incidents” – festival of Città della Pieve, 2012).

“I go around talking about women and about humiliated and offended people” – says Valeria – “and I do not forget that behind me there are generations of work and honesty: in my father’s village, Castelluccio Valmaggiore in the province of Foggia we used to say, in order to emphasise the duty of doing something, Giusto giusto come mastro Palumbo (‘Do it just right like Master Palumbo’).  My grandfathers were carpenters”.

For those who want more information about her this is the link to her website: www.valeriapalumbo.com.

To listen to the story of Paolo and Francesca read by Valeria Palumbo in the original Italian verses of Dante (Inferno, Canto V, 73-142), click here below:

Valeria Palumbo has lent her voice to Francesca da Rimini and read the relevant verses (88-142) in the translation into Roman dialect by Maddalena Capalbi.
To listen to this reading click here below: