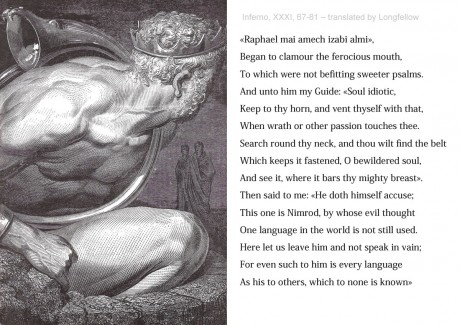 In order to see the front page of the first printed edition of the Divine Comedy (Johan Numeister, Foligno, 1472) with the first tercets of the Hell (Verses 1-21) click here.

In order to see the front page and the first tercets of the Hell (verses 1-21) in the Venetian edition of 1564 (Giovambattista, Marchiò Sessa e fratelli) click here.

In order to see the first tercets of the Hell (verses 1-21) in the critical edition of Enciclopedia Dantesca (1978) click here.

The websites that offer the entire original text of the Divine Comedy online are quite numerous. Dantepoliglotta reports its visitors the site http://divinacommedia.weebly.com/, which provides extensive comments as well, for every single canto.

We also report the sites http://www.worldofdante.org/ and http://digitaldante.columbia.edu/, two multi-media research tools in English  intended to facilitate the study of the Divine Comedy.