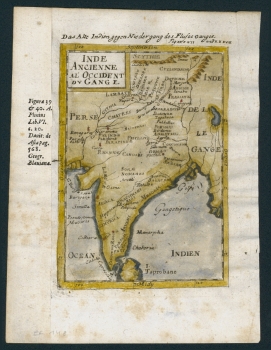 In Dante’s time, India, which was almost entirely under Arab domination, was very little known by the Europeans even if Marco Polo had visited some of its centres on the West coast in the course of his return journey (1292–1295) and had then spoken of them in his Milione.

According to Dante, India, and in particular the mouth of the river Ganges, was the extreme eastern limit of known lands, a fact that resulted besides, albeit approximately, from the planispheres of his time (in particular, from the Vesconte Planisphere of 1320).  Indeed, in the 13th and 14th centuries European astronomers and geographers and those of the Near East had no doubts about the Earth being a sphere, but they distinguished between the hemisphere of the known lands, with their centre at Jerusalem, and the opposite hemisphere which was believed to be entirely covered by the oceans.  And the limits of the inhabited lands were identified to the West as the last edges of the Iberian coastline between Cadiz and Portugal close to the Pillars of Hercules,

[1]
and, to the East, as the East coast of India where indeed the Ganges reaches the sea.

Dante, who  imagined the mountain of Purgatory as being a solitary island in the centre of the watery hemisphere in the antipodes of Jerusalem, mentions the mouth of the Ganges more than once as being the eastern point of the astronomical horizon, common to both hemispheres, the only difference being that in Jerusalem’s hemisphere, at that point, the sun is seen to rise while in the opposite hemisphere, at the same point, it is seen to set (Purgatory, II, 5 – Purgatory XXVII, 4 – Paradise, XI, 51).

It is towards the middle of the 19th century that the first Indian scholars approached Dante’s work.  The first was the Bengali poet and playwright, Michael Madhusudan Datta (1824-1873), who knew Italian well and was the author of the epic poem Meghnad Badh Kavya (Ballad of the death of Meghnad) published in 1861 in which the deeds of a warrior cited in the Ramayana [2] are sung about. In this Ballata one can detect the influence of Indian and Western poets amongst which Dante and Milton appear to be those from whom the author has drawn most of his inspiration.  Madhusudan Datta also wrote various sonnets inspired by Petrarch and dedicated one of them – with the title Dante, the poet of poets – to the author of the Divine Comedy himself.

Some years later the major Indian poet, Rabindranath Tagore (Calcutta 1861-1941), familiarises himself at a very young age with Dante and Petrarch to the extent that he publishes an article on both in 1877, at the age of 16, in the periodical “Bharati”.  Later he is to insert into one of his poems – which comes across as a prayer – the verse “Give me the strength to surrender my strength to your will with love”, clearly inspired by verse 85 of the third canto in Paradise:  «E ‘n la sua volontade è nostra pace».[3]

Furthermore, Tagore is not the only Indian intellectual who shows a great appreciation of that famous verse from Paradise.  Sri Aurobindo (1872-1950), a well known poet, philosopher and Indian mystic, perhaps the principal student of the Divine Comedy in present day India, deals extensively with Dante’s poetry in the third volume of his Letters on yoga and says that that verse “is one of the greatest in all poetic literature”.

Finally, the Bengali scholar and poet Dinseh Chandra Datta deserves to be mentioned, not only because he himself is the author of a sonnet dedicated to Dante, but also because his profound admiration for the great poet has induced him to translate the Bhagavad Gita [4] from Sanscrit into Bengali using Dante’s metre of the third rhyme.[5]

Despite the interest in Indian culture for Dante Alighieri, we have no information of the Divine Comedy having been translated into Hindi, which is the most widespread of the national languages of India, as well as the Union’s official language. [6]  It has, however, been translated recently into Bengali, which is – like Hindi – an Indo-European language and  is the second most outspread national language of the large Asian country, with 200 million speakers.  The translation into Bengali was done by Shyamalkumar Gangopadhyay and was published in 2011 at New Delhi.

The first translation of the Divine Comedy into a language of India, however, is not the one in Bengali, but is the one in the language Malayalam, a Dravidian language spoken by about 33 million people, being the national language of the state of Kerala.  This translation, in verse, was done by Kilimanoor Ramakantan and was published in 2001 at Mumbai.

For more information about the Bengali translation by Gangopadhyay click here.

For more information about the Malayalam translation by Ramakantan click here.

Besides those points where the river Ganges is mentioned, there is no lack in the Divine Comedy of other references to India and the Indians in such terms as to make one realise that the great poet, albeit with only a slight knowledge of that distant country, had two firm convictions about its physical and climatic characteristics: 1) in India the trees were of an astonishing height; 2) in India one literally exploded with the heat.

On the first point Dante pauses in canto XXXII of Purgatory (verses 40-42) when the poet, by now arrived in earthly paradise, finds himself before the tree of knowledge of good and evil, towering and majestic to the extent that its lofty foliage – Dante writes – would be looked on with surprise even by the Indians who have extremely tall trees in their own woods:  «fora da l’Indi / ne’ boschi lor per altezza ammirata».[7]

Still in Purgatory at verses 19-21 of canto XXVI – coming thus to the second point – Dante  tells of his meeting with one of the penitents of the circle of the lascivious who poses a question and adds, also in the name of the souls around him, that he and the others are thirsting to know his answer more than Indians and Ethiopians (precisely because of the great heat of their countries) thirst for fresh water:  «Né solo a me la tua risposta è uopo; / ché tutti questi n’hanno maggior sete / che d’acqua fredda Indo o Etïopo».[8]

But the point at which Dante alludes most decisively to the exceptional heat which was to characterise the climate of India is in canto XIV of Hell (verses 28-39) where the poet describes the burning sand (third ring of the seventh circle) in which those who offer violence towards God are punished by being subjected to a continuous rain of fire.  Dante compares this awful scene with what happened once to Alexander the Macedonian and his troops – but it is clearly an implausible legend – in the hot regions of India: they saw unseparated sheets of flame pour down on them which came to earth to ignite the sand like tinder which catches fire when the flint is struck.  At which Alexander the Great had ordered his men to stamp on the sheets of flame as soon as they came to earth in order to put them out before they spread.

We reproduce below the verses of Dante about the burning sand and the legendary adventure in India of Alexander the Macedonian:

According to the Indian Constitution the Bengali and Malayalam languages are only two of 22 official national languages in the Federation.  On the other hand, English, extensively used by the legislature and the judiciary as well as in economics and business managements, has maintained its special status as the “official subsidiary language” of India.  For historical reasons it is the Queen’s English.

Therefore, on this web page, the verses above are reproduced also in an English translation drawn from those of a British author of the post-colonial era:  the one by Geoffrey Bickersteth who taught English and other languages at Marlborough College and at the University of Glasgow and who is one of the very few who have translated the Divine Comedy into English using the third rhyme.  A tremendous effort, like the one which undertook our Bengali translator Gangopadhyay, and not dissimilar to that of the Bengali scholar who translated the Bhagavad Gita into his own language many years ago, in Dante’s tercets.

–
O’er the whole sandy desert, falling slow,
dilated flakes of fire were being rain’d,
as on a windless alp descendeth snow.
Such flames as Alexander, when he attain’d
to those hot parts of Ind, upon his host
saw, even to the ground unbrok’n, descend;
wherefore he bade his troops, ere time were lost,
stamp on the soil, because the ignited air
was easiest quenched, where isolated most.
Just so the eternal heat kept falling there
whereby, to increase the pain twofold, the sand,
like tinder under steel, was set aflare.
–

[1] In antiquity the Straits of Gibraltar were considered to be an impassable frontier beyond which no mortal might pass.  In Greek mythology it was Heracles (Hercules in Roman mythology) who opened the Straits of Gibraltar in one of his twelve labours: he divided into two (the two Pillars of Hercules) the mountain which rose up in that place and wrote the words non plus ultra, the equivalent of No Access on a modern sign.  It is not by chance that, in the reconstruction of Ulysses’ last voyage which Dante offers us (Hell, XXVI, 106-142), the hero and his companions die in a shipwreck immediately after having passed the Pillars of Hercules, having violated that prohibition.

[2] The Ramayana and the Mahabharata are the two great masterpieces of ancient Sanscrit literature, both epic poems and sacred texts in Hindu tradition.

[4] The Bhagavad Gita (“Song of the Blessed”) is one of the chapters of the Mahabharata and consists of a poem with religious content of about 700 verses divided into 18 cantos.

[6] For a taste of the translation of the beginning of Hell (verses 1-21 of the first canto) in Hindi and Punjabi, kindly offered by Jasvinder Kaur Malhi, click here.

[7] «had been by Indians / among their forests marvelled at for height» (translation in English by Henry Longfellow); «admirus Hindoj / en arbaregoj siaj, pro l’ alteco» (translation in Esperanto by Giovanni Peterlongo).