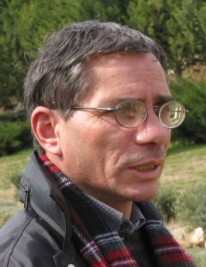 Tano Avanzato, born in 1957 in Campobello di Licata (Agrigento), is a Sicilian ballad-singer.  He started this occupation in 1991 when he founded, together with his wife Erminia Terranova, the popular song group Zabara.  He has to his name hundreds of concerts which he has staged in various centres of Sicily, other regions in the south and in Lombardy, as well as in France, England and the United States.

In 2002 he won the prize “Memorial Rosa Balistreri” for the song Malarazza.

He is especially noted and appreciated for his musical interpretations of the poetry of Ignazio Buttitta (1899 – 1997), one of the most famous poets of the Sicilian dialect, and he has organised numerous events in collaboration with the Ignazio Buttitta Foundation of Palermo which has produced some CDs with his renditions and, moreover, has often invited him to put on educational shows for high schools.

In 2006 he recorded an extract from the title La Tristizza (“Sadness” in dialect) which is a part of a double CD anthology of the title La mia vita vorrei scriverla cantando (“I should like to write my life story in song”), in which the finest performers of popular Sicilian song have participated, while in 2007 he published a CD of the Zabara group, recorded live, entitled Lu trenu di lu suli (“The sunshine train” in dialect).

Still in 2007, in the context of the Festival delle Orestiadi of Gibellina (Trapani) he took part in a show together with Etta Scollo, Pier Paolo Petta, Franco Scaldati and produced by Enrico Stassi, from which the Buttitta Foundation and the Region of Sicily have produced a CD entitled Nun sugnu poeta (“I am not a poet” in dialect).

In 2010, in collaboration with the Archives of the Resistance and the Blanca Teatro of Carrara, he put on the show Ballata per i fratelli Cervi (“Ballad for the Cervi brothers”) by Ignazio Buttitta, which was a part of the show Portella della ginestra (“The Gorse Door”) by Ignazio Buttitta, staged for the first time nationally at Fosdinovo’s Festival di Resistenza (Carrara).

Currently (2014) Tano Avanzato and the Zabara Group are undertaking the staging of a new show  about the mafia (with the participation of Giuliano Turone), entitled Io vedo, io sento… e parlo – Mafia da sud a nord (“I see, I hear… and I speak – Mafia from south to north”), which had its debut in Milan in 2011 under the patronage of the Saveria Antiochia – Omicron association of Milan.

Tano Avanzato has lent his voice to Ulysses and read the relevant verses (Hell, XXVI, 90-142) in the translation into Sicilian by Giovanni Girgenti.