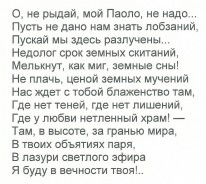 Francesca da Rimini is an opera in three tableaux, with a prologue and an epilogue by Sergei Vasilevich Rachmaninov from the book by Modest Ilyich Tchaikovsky.  Its début was on January 11th 1906 at the Bolshoi Theatre in Moscow.

The opera opens with a prologue located in the second circle of Hell where Virgil’s shadow shows Dante the  lascivious and how they are punished.  The shadows of Paolo and Francesca draw near and the girl recounts their misbegotten love story.

In the first tableau Lanceotto begs Francesca to truly love him because he fears that she has a lover; he receives a brusque and dismissive reply.  Indeed, Francesca is still offended by the deceit to which she was subjected at the wedding: she believed that she had married Lanceotto’s younger brother, Paolo the Handsome, when instead she had married the unpleasant Lanceotto by proxy.  The two siblings by marriage are in fact in love.  In the second tableau Paolo comes into Francesca’s chamber while Lanceotto is away and kisses her.  But they are caught unawares by Lanceotto who has returned unexpectedly and who kills them.

The opera ends in Dante’s Hell where the damned take up their eternal burden.