Radomila (Radka) Oblouková, a citizen of the Czech Republic, is a teacher of Czech language and literature in the High School of Svitavy, a town of  Moravia, whose German name was formerly Zwittau, known for being the birthplace of Oskar Schindler (1908-1974), the German industrialist who saved the lives of more than thousand Jews during the Holocaust, by employing them in his factories. Svitavy is also the seat of an important Esperanto museum.

Radka herself wrote her autobiographical profile as follows:

«The Czech Republic is not only the country of my birth but also a corner of the earth which is embedded in my heart.  This relationship has undoubtedly extended itself into my profession of teacher.

Language – especially the spoken word and theatre – became my lifelong love and, at the same time, my cross.  That is to say that in 1994 I founded a student theatrical troupe called DOcela MAlé divalo (“Really Small theatre”, or DoMa Theatre) and I spend all my free time “treading the boards”.

The DoMa troupe of Svitavy now has more than 30 members aged between 12 and 25 years.  As the leader, set designer and producer of the ensemble, I belong, regrettably, to a different age group.

Our repertoire contains plays of different types – children’s theatre, magic shows, drama, plays in verse or classical plays for students.  Many of our shows have been honoured in various theatrical festivals in the Czech Republic, some, too, abroad.

Esperanto delighted me and our troupe magically.  In 2012 we prepared a show in Esperanto called Terura Sonĝo (“A Terrible Dream”), after the theatrical text R.U.R. – Rossumovi univerzální roboti (“R.U.R – Rossum’s Universal Robots”), a science fiction play of 1920 by the Czech dramatist Karel Čapek, which was performed at the International Congress of Esperanto in Rejkjavik in 2013 in front of an audience of about thousand people from 56 countries.  An exalting experience!

Since childhood I have been fascinated by the theatre and poetry and I once devoted myself to reciting it.  That is why, with great joy and humility, I accepted the offer to record my recitation of a fragment of the Divine Comedy in the Czech language».

Radka Oblouková has lent her voice to Francesca da Rimini and read the relevant verses (Inf., V, 88-142) in the translation into Czech by O.F. Babler and J. Zahradníček.
To listen to this reading click here below: 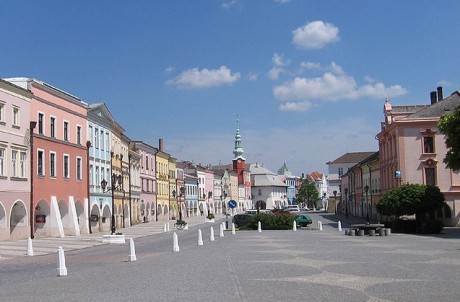