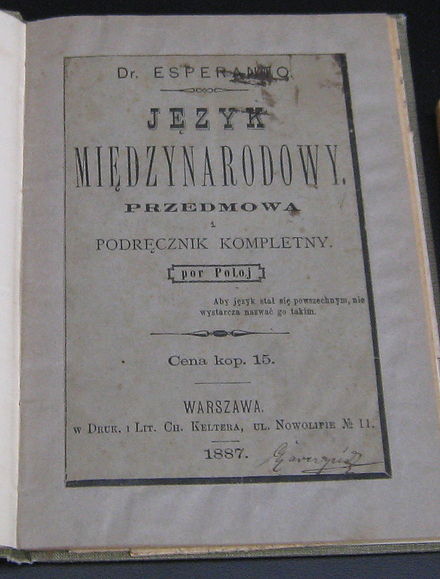 Esperanto, which has three different translations of the Divine Comedy (by Enrico Dondi, Kálmán Kalocsay and Giovanni Peterlongo), is a planned language which was developed between 1872 and 1887 by the Polish physician and linguist Ludwik Lejzer Zamenhof (Białystok 1859 – Warsaw 1917). This language is by far the most known and used among the various international auxiliary languages created since the beginning of the nineteenth century to the present. The First Book of Esperanto (Unua Libro) was published in Warsaw in 1887.

The Esperanto experts prefer the expression planned language than the more common expression artificial language, because this one might lead to recognize some aspects of unnaturalness in the communication through this language, which they deny.

Dante seems to agree with them when he says:

These lines (Par., XXVI, 130-132), in the Esperanto translation of Enrico Dondi, sound like this:

The same lines were translated into English by Allen Mandelbaum as follows:

That man should speak at all is nature’s act,
but how you speak—in this tongue or in that—
she leaves to you and to your preference.

Anyone interested in the theme of planned international auxiliary languages knows that other linguistic projects of this type intervened, but none of these projects had the spread of Esperanto. Furthermore, no other planned language can boast full translations of the Divine Comedy, except for Interlingua, in which there is a terza rima translation of Hell.

Click here to learn more about planned languages
and samples of Dante’s translations in some of them.