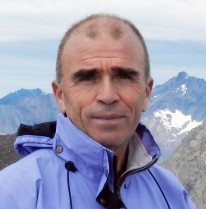 Nereo Zeper is born in Trieste in 1950.  Still a child, he is drawn to music, learning to play the clarinet.  At the age of thirteen he reads Salvatore Quasimodo and Umberto Saba and writes his first poems.  After his high school diploma he enrols in the faculty of Literature and Philosophy at the University of Trieste where he takes his degree in 1976.

On the sporting side, during his university years, he is attracted by mountaineering and rock-climbing, takes part in the activities of the CAI (the Italian Alpine Club) of Trieste and completes several climbs in the Dolomites.

On the musical side, during the early eighties, he is a member of the choir of the Tartini Conservatory in Trieste and takes part in some ten concerts.

In 1977 he takes a job at the Trieste office of RAI (Italian Radio and Television) as an assistant producer.  He learns his trade by collaborating in the production of radio programmes with producers like Amodeo, Pressburger, Bolchi and others.  In 1990 he moves on to the role of producer and directs a series of radio plays with actors like Paolo Ferrari, Valeria Valeri, Omero Antonutti and others, also makes television documentaries, often with a mountaineering theme, amongst which are, in 1998, Gli uomini e le montagne – Alpinisti del Friuli Venezia-Giulia (“Men and mountains – mountaineers of Friuli Venezia-Giulia”) which is a part of the Trento Film Festival.

In 1999 he makes a television version of his film Ladro di Montagne (“Thief of Mountains”) which wins the prize “Genziana d’argento” as the best film about mountains at the film festival “Città di Trento“ and the Swiss Alpine Club’s prize at the international film festival of Les Diablerets.

In 2007 he writes, directs and acts in Omaggio a Berto (“Homage to Bert”) at the Castello di Duino and the auditorium in Gorizia, a show on the occasion of the fiftieth anniversary of the death of the great Trieste poet, Umberto Saba.

Nereo Zeper has lent his voice to Ulysses and read the relevant verses (Inf., XXVI, 90-142) in the Trieste vernacular translation written by himself.