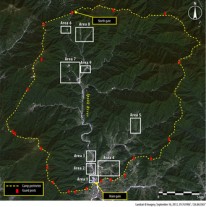 Satellite image of Kwanliso 15, taken on 16 September 2013. The camp is surrounded by a double fence along its perimeter and numerous guard posts. Access is highly restricted through two gates on opposite sides of the political prison camp.

In October 2013, Amnesty International commissioned analysis of satellite images of political prison camp (Kwanliso) 15 at Yodok in South Hamgyong province and Kwanliso 16 at Hwaseong in North Hamgyong province. The images show that instead of heeding the growing calls for closing its political prison camps, repression by the North Korean authorities has continued and the prisoner population in kwanliso 16 appears to have slightly increased. The North Korean authoritiesâ on-going investment in the countryâs political prison camps is part of the continuing systematic, widespread and grave violations of human rights throughout the country.