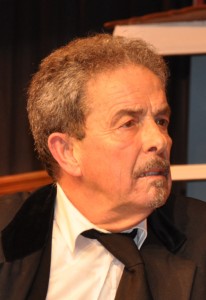 Mario Peccerini was born in 1938 in Camogli, a little Ligurian town with great maritime traditions.  He himself has been a captain of merchant and military vessels for a long time as well as being the director of a major Genoan shipping company.

Now retired, he busies himself with the theatre and is, besides, passionate about the Genoan vernacular of which he is a teacher in various municipalities and associations on the eastern Ligurian coast (Pieve, Recco, Camogli and Santa Margherita).

Holding the diploma of the Teatro Campopisano di Genova drama school, he is today Artistic Director, producer and actor in the Compagnia del Teatro Stabile “San Giuseppe” in Ruta di Camogli, founded by him in 1997, a year away from the inauguration of the Drama School established and directed by himself there.

The photograph of the scene published on this page comes from the comedy The Pleasure of Honesty by Luigi Pirandello.

Mario Peccerini has lent his voice to Ulysses and read the relevant verses (Inf., XXVI, 90-142) in the Genoan vernacular translation of Angelico Federico Gazzo.