In a flowery valley of Antipurgatorio Dante and Virgil, led by Sordello, see the souls of the negligent princes. Here Dante mentions Bohemia for the first time, pointing it through  the names of its two rivers Vltava and Elbe (in Czech, Labe). When Dante meets the soul of King Ottokar II of Bohemia, he presents him next to his former enemy Rudolf of Hapsburg, showing that in Purgatory every earthly passion disappears. In fact, the two antagonistic princes even take comfort in each other in that flowery valley. The Poet also points out that King Ottokar was a better ruler than his son Wenceslas, who ascended the throne of Bohemia when his father died.

See below the two terzine (Purg., VII, 97-102) both in the original language and in the Czech translation of Otto František Babler and Jan Zahradníček . 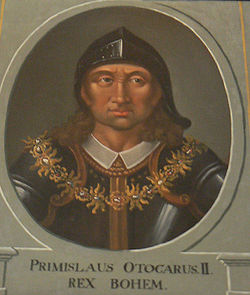 The other, who in look doth comfort him,
Governed the region where the water springs,
The Moldau bears the Elbe, and Elbe the sea.
His name was Ottocar; and in swaddling-clothes
Far better he than bearded Winceslaus
His son, who feeds in luxury and ease.