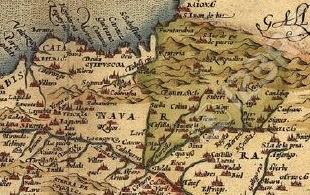 The Basque language (the Basque name is èuskara) is an isolated language which appears to have no relation to any other language and has been spoken since time immemorial in the north of Spain in the region of the Pyrenees (Spanish Basque country: a region of Navarre and the other contiguous provinces) and of the extreme south-west of France (the département of the Atlantic Pyrenees).

In Dante’s time Navarre was governed by the counts of Champagne and was an autonomous and flourishing region.  It had been consolidated in the course of the 19th century but with its history closely linked to that of Castille and Aragon.  For this reason too, the Basque language in that geographical area had always been – and still is today – a minority language in relation to Spanish (and today is spoken as a mother tongue by only 20% of the Basques).

We do not know whether Dante was aware of the linguistic peculiarities of Navarre and the existence of the Basque language.  The fact remains, however, that Navarre is mentioned very frequently in Dante’s works.

[1]
In De Vulgari Eloquentia the poet remembers the first of the counts of Champagne who became king of Navarre, Theobald I (1234-1253), who was also a lyric poet.  His son and heir, Theobald II (1253-1270), is then mentioned by Dante in a flattering assessment as a “good king” in canto XXII of Hell in verses 48-54 where Dante and Virgil, amongst other things, encounter a strange person who seems to be an actual Basque: Ciampòlo of Navarre.

The two poets meet Ciampòlo in the fifth pit of the eighth circle where the swindlers, that is to say, the corrupt public officials, pay for their sins immersed in boiling pitch.  We know absolutely nothing about this person apart from what we read in those verses: he was the son of a no-good spendthrift, his mother had put him into service with a gentleman after which he had been in the service of King Theobald II, but while there he had been guilty of acts of embezzlement.

Knowing no more about him we cannot say whether his mother tongue was really Basque, but we strongly suspect and like to think it was so.

Here then are the verses relating to Ciampòlo of Navarre (Hell, XXII, 48-54) in the original and in the prose translation into Basque by Aita Santi Onaindia:

[1] Navarre is cited also in one of Dante’s frequent invectives against the French dynasty and, in particular, against Philippe Le Bel. It is a brief invective (Paradise, Canto XIX, verses 143-144) which is a part of the harsh accusations levelled by the Celestial Eagle against bad governors: «beata Navarra, / se s’armasse del monte che la fascia!» («Happy Navarre, / if mountains that surround her served as armor!» [trans. Mandelbaum]), that is to say, Navarre will be blessed if it distances itself from the misrule of the French kings by sheltering behind the Pyrenean chain of mountains which protects it to the north.  It had happened that the penultimate king of the Champagne dynasty, Henry I of Navarre (1270-1274), had had the idea (an inauspicious one, at least for Dante), to give the hand of his daughter, Jeanne (Joan), to Philippe Le Bel himself with the result that, after King Henry’s death, and even more so after the death of Queen Joan I, his daughter (1274-1305), the last representative of the House of Champagne, Navarre had fallen under the control of the French dynasty.  Dante returns to this theme also in canto VII of Purgatory (verses 107-109) when, in the valley of the negligent princes of Antipurgatory, he encounters the very ghost of Henry I of Navarre who sighs broken-heartedly for the misery of being the father-in-law of the «mal di Francia» («pest of France», [trans. Mandelbaum]) Philippe Le Bel.