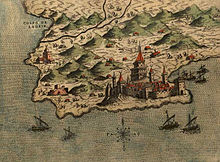 It seems that Dante could not have known about the existence of the Albanian people who were at that time subjugated by the Byzantine empire.  In the Divine Comedy however the Albanian city of Durrës is cited: its name is made by the spirit of the emperor Justinian whom Dante meets in the heaven of Mercury.  Justinian runs through the history of the Roman empire and relives the feats of Julius Caesar who, having crossed the Rubicon, started the war against Pompey and his followers, defeated his legates in Spain and then came ashore at Durrës, crossed Illyria and reached Thessaly, defeating Pompey at Pharsalus.  The latter reappeared in Egypt where he was killed (Par., VI, 61-66):

The same verses sound like this in the Albanian translation of Pashko Gjeçi:

And what it did, once it had left Ravenna
and leaped the Rubicon, was such a flight
as neither tongue nor writing can describe.
That standard led the legions on to Spain,
then toward Durazzo, and it struck Pharsalia
so hard that the warm Nile could feel that hurt.