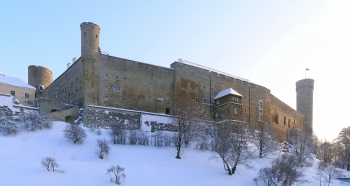 The first instances of translation of the Divine Comedy into Estonian – a Ugro-finnish language related to Finnish – are due to the poet and italophile Villem Grünthal-Ridala (1885-1942) who published in 1911 a version of the first canto of Hell, and to the poet and literary critic Johannes Semper (1892-1970) who published in 1939 a version just of the third canto of the same part.  A complete translation, albeit just of Hell, was only published in 2011 and this is due to the poet Harald Rajamets (1924-2007), a translator also of some of Shakespeare’s works.

In Dante’s time Estonia was a dominion of the king of Denmark.  By 1219 the naval might of King Valdemar II of Denmark, with the blessing of Pope Honorius III, had disembarked in the port of Lyndanisse (modern Tallinn) and had brought into existence the Duchy of Estonia.  From then onwards the Danish kings had taken the additional title of dukes of Estonia, retaining their control over the territory in question throughout Dante’s lifetime.  However, there is no indication that Dante had any clear idea of these events: neither of the Danish ones and even less of the Estonian ones.