China, known in Dante’s time as Cathay, was in that period a part of the Tartar Empire, peoples speaking Mongolian who originated from central Asia which, under the leadership of Genghis Khan (1162-1227) and his successors, that great empire had brought into being.  Indeed, in the Divine Comedy Dante never refers directly to China but mentions the Tartars and does so in such a way as to make one think that he is not really alluding to them but is alluding to their Chinese subjects.

The opportunity arises when Dante and Virgil have to go down the abyss which separates the seventh circle from the eighth (Malebolge) where the souls of the fraudulent are punished.  The two poets let themselves be taken to the bottom of the abyss on the back of Gerione, the winged monster who is the guardian of Malebolge.

Dante describes Gerione’s features and presents him as a monster which symbolises Fraud which infects the whole world: it has the face of an honest man which inspires confidence but has two paws which are covered in fur up to the armpits as well as the body of a snake which is armed with a scorpion’s tail.

And it is at this point in the description that an indirect reference to China and its artistry is inserted.  The body of Gerione is flecked with knots and coloured roundels which Dante compares to  the variegated cloths for the drapes made by the Tartars (and by their Turkish cousins) where the word “Tartars” is probably used to mean “Chinese” because it was predominantly the Chinese and not their overlords who produced and exported their brocades in Dante’s time.

[1]
Marco Polo (1254-1324) also speaks of these sought after cloths in his Milione in which he writes that in Peking “there come every day not less than one thousand cartloads of silk; there they work on endless numbers of silk and gold cloths”.[2]

Those drapes were exported in great quantities to Europe where they were much appreciated.  Perhaps Dante had had the chance to see them at the court of his friend and protector Cangrande della Scala (1291-1329), a lord of Verona who had a lot of them.  This is confirmed by the discovery in his tomb in 1921 of oriental brocades (now preserved in the Verona Museum) on one of which are designs which have been identified as typical of Chinese artistry.

We reproduce below Dante’s verses with the description of Gerione and the reference to the Chinese brocades (Hell, XVII, 1-17), followed by the relevant Chinese translation by Zhu Wei-ji: 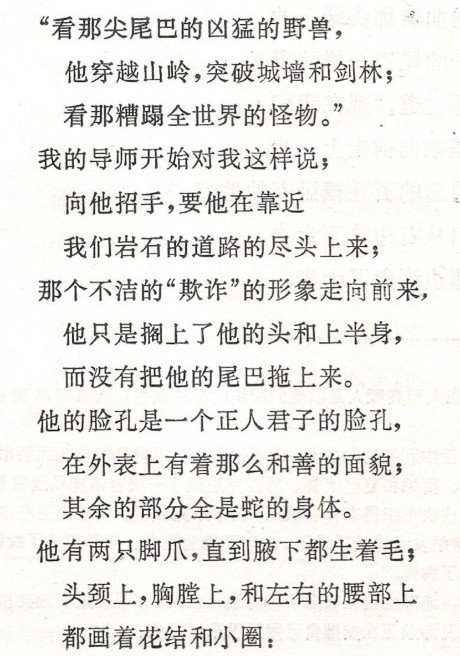 Here is how the same verses have been translated into English by Allen Mandelbaum:

«Behold the beast who bears the pointed tail,
who crosses mountains, shatters weapons, walls!
Behold the one whose stench fills all the world!»
So did my guide begin to speak to me,
and then he signaled him to come ashore
close to the end of those stone passageways.
And he came on, that filthy effigy
of fraud, and landed with his head and torso
but did not draw his tail onto the bank.
The face he wore was that of a just man,
so gracious was his features’ outer semblance;
and all his trunk, the body of a serpent;
he had two paws, with hair up to the armpits;
his back and chest as well as both his flanks
had been adorned with twining knots and circlets.
No Turks or Tartars ever fashioned fabrics
more colorful in background and relief…

[1] Giuliano Bertuccioli, in Enciclopedia Dantesca, Vol. V, p. 525, which additionally explains that the two terms used by Dante [sommesse and sopraposte (“underlaid” and “superimposed”)] serve to designate the two different decorations effected by directly colouring the underlying weft of the cloth (sommesse) or by superimposing embroidery or designs in relief (sopraposte).