In order to read this Introduction in Latin click here 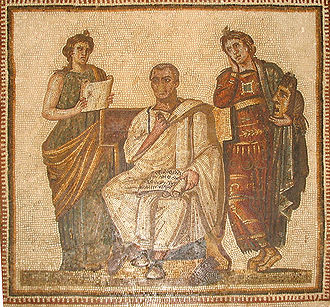 Translate the Divine Comedy into Latin?  Perhaps even Bishop Giovanni Bertoldi of Serravalle was a bit taken aback when, during the council of Costanza, some of his British colleagues invited him to complete this undertaking.  But then he ended up accepting.  Basically it was not a bad idea to make available to the foreign churchmen Dante’s poem translated into Latin, the universal language of that time, so as to make it accessible also to those who were not familiar with Italian. 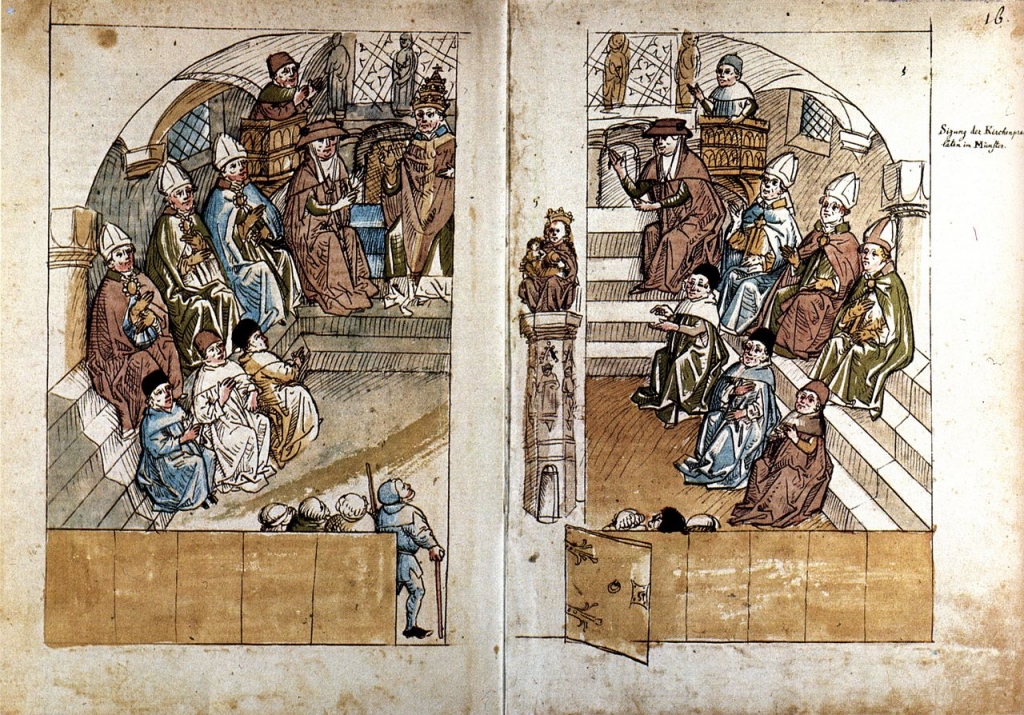 Above all – this was towards the end of 1415 – the atmosphere in that ecumenical council had become heavy, especially after a stream of fanatical councillors had sent the honest Bohemian theologian, Jan Hus, to the stake for heresy.  The matter had traumatised and depressed Giovanni Bertoldi who was a man of great mildness as was to be expected from such as he, a Franciscan monk and from Romagna to boot.  Moreover, the council meetings had in the mean time practically run into the sand and in the wintry cold of Costanza boredom reigned supreme. 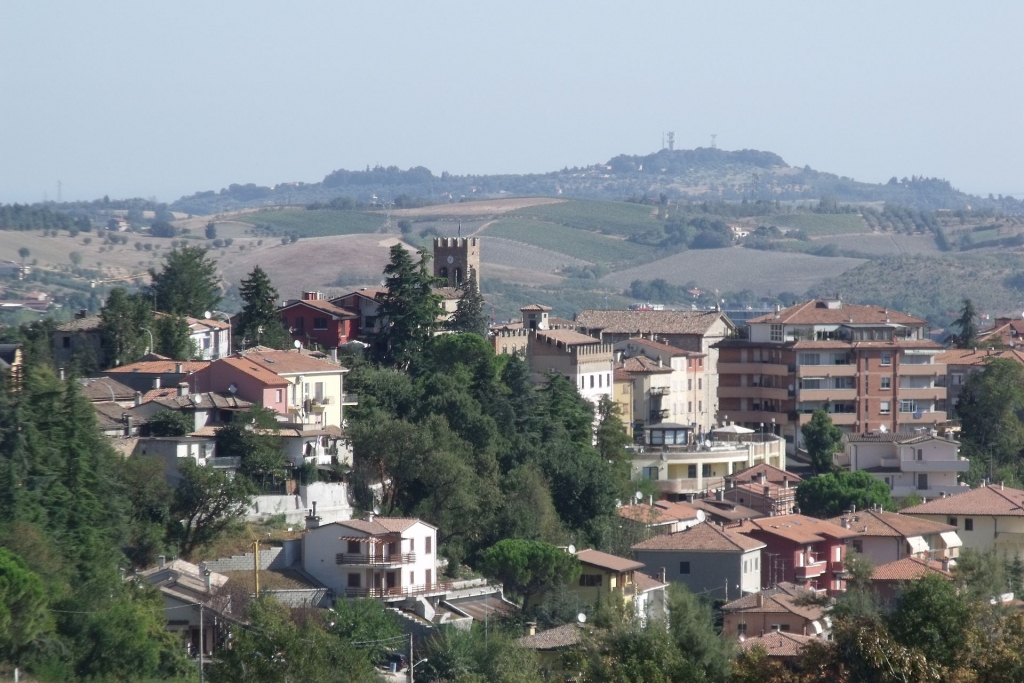 And so it was that the good Giovanni of Serravalle found comfort for his melancholy by plunging headlong into the work, managing to finish his translation of the poem by the year 1416, verse for verse in Latin prose, as well as the associated commentary.

Many have asked whether Dante would have been pleased to know that someone was translating his Comedy into Latin after he had spent years of work researching the volgare illustre (i.e. the best version of the commonly used vernacular) and giving that very language his poetic masterpiece.

It has also been said in this regard that in 1416 the citizens of Ravenna would have often given warning, in the dead of night, of a strange noise like distant thunder which would have been in reality the very clangor of the bones of Dante which were turning over in his tomb. (1)

We of Dantepoliglotta, on the other hand, think that Dante would have appreciated the fruits of Giovanni of Serravalle’s labours because, notwithstanding his predilection for the superior vulgate, the supreme Poet also nurtured a great love and respect for the Latin language.  Indeed, in the Convivio he had affirmed in no half-hearted way that Latin was for many verses superior to the still young Italian language: superior not only for its nobility “because Latin is permanent and incorruptible while the vulgate is unstable and corruptible”, but also superior for its virtue “because Latin exposes many things which have been conceived in one’s mind which the vulgate cannot do, as is known by those who have a sermon in either language”. (2)

Besides, Dante’s love for Latin and its culture comes out also in the Divine Comedy, both through the veneration he shows for Virgil and, in particular, through the words which the poet in the seventh canto of Purgatory puts into the mouth of Sordello. 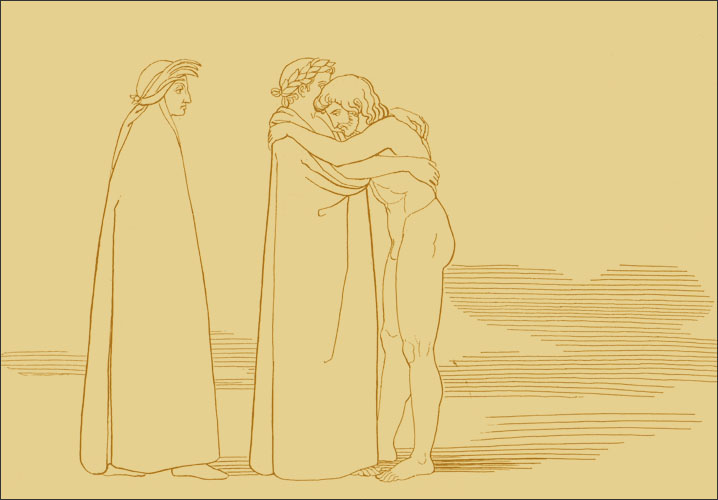 Sordello of Goito, a Mantovan like Virgil, a troubadour of the 13th century, famous for his poetic output in the Provencal language, meets the two poets in the Antipurgatory.  As soon as he realises, to his great surprise and emotion, that he is in the presence of Virgil, he embraces him humbly and attributes to him the highest merit of having shown with his Aeneid “everything that our language is capable of”, that is to say, precisely, the Latin language (Purg., VII 10-19):

And here are the same verses translated into Latin by Brother Giovanni of Serravalle:

The same verses were translated into English by Allen Mandelbaum as follows:

Even like one who, suddenly, has seen
something before him and then, marveling,
does and does not believe, saying, “It is…
is not,” so did Sordello seem, and then
he bent his brow, returned to Virgil humbly,
and clasped him where the lesser presence clasps.
He said: “O glory of the Latins, you
through whom our tongue revealed its power, you,
eternal honor of my native city,
what merit or what grace shows you to me?

But Giovanni Bertoldi was not the only one to translate the entire Divine Comedy into Latin.  Already some decades before him the grammarian and Latin poet Matteo Ronto, a Benedictine Olivetan monk from Venice, had immersed himself in the task.  Only a few extracts have come down to us.  In the first half of the 18th century it was the turn of the Neapolitan Jesuit, Carlo d’Aquino.  Other translators followed in the 19th century amongst whom the abbot Gaetano Dalla Piazza of Vicenza (1848) and the humanist Giuseppe Pasquale Marinelli of the Marches (1874) deserve mention for their translations into hexameters of the entire poem.

This is how the latter translated into the classical Latin meter the same verses shown above:

The last Latin translation of the Divine Comedy – in prose – was made by Antonio Bonelli, a Milanese doctor passionate translator of classics.