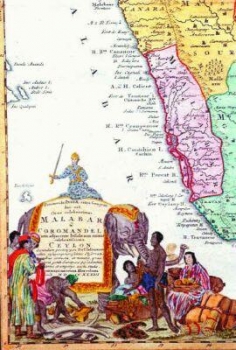 Among the national languages of the Indian Union, the first one into which the Divine Comedy was translated – in 2001 by the poet Kilimanoor Ramakantan – was Malayalam, one of the Dravidian languages of the large Asian country.  The language Malayalam, spoken by about 33 million people, is the national language of the state of Kerala, the Indian state which boasts the highest level of literacy in the country (90%), located along the west coast of the southern tip of the Indian peninsula.

See also the introduction to the category “Indiane (lingue)”, article “The Divine Comedy and the languages of India”, clicking here.

In that article verses 28-39 of canto XIV of Hell are reported (in the original and in the English translation by Bickersteth), where Dante describes the burning sand in which those who offer violence towards God are punished by being subjected to a continuous rain of fire.  In doing this description the poet mentions India.

We thus report those same verses in the Malayalam translation done by Kilmanoor Ramakantan, by reproducing here below the page which includes them: