In De Vulgari Eloquentia Dante did not particularly dwell on the Neapolitan dialect, which he perhaps did not know well enough, but limited himself to citing it together with the Gaetan dialect as an example of the marked linguistic differentiation even between towns very close to one another, then inserting it into the broader linguistic southern region which he called Apulia. (1)

Otherwise, it does not seem that Naples, its monuments and its cultural riches were much in the forefront of Dante’s thoughts.  Indeed, it could be said that the poet’s aversion to French politics had created the side effect of relative coldness towards that city.  In fact, in Dante’s time the kingdom of Naples was in the hands of the Angoini of the Sicilian branch for whom the poet harboured the same vehement antipathy that he showed in no half measure against the French royal house.  This antipathy was due to the fact that both the one monarch and the other were allies of the papacy, had overturned the Swabian monarchy with which the poet sympathised and were enemies of that Empire whose restoration Dante longed for.  It remains a fact that the only point in the Divine Comedy where the Parthenopean city is explicitly referred to is in the third canto of Purgatory (verses 25-27).  Dante, having only a short time ago left the darkness of hell for the light of the sun, for the first time sees his own shadow again and, not seeing that of Virgil next to his, has a moment of fear because he is afraid that the great poet has abandoned him. 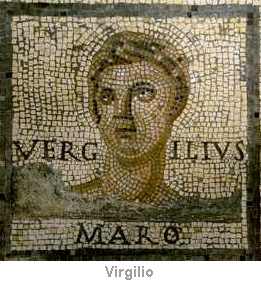 Virgil reassures him and reminds him that since his death in Brindisi his body is to be found buried in Naples and therefore cannot cast a shadow:

This is how these verses have been translated into Neapolitan by Nazario Napoli Bruno:

The same verses were translated into English by Allen Mandelbaum as follows:

The body from within which I cast shadows
is buried where it now is evening: taken
from Brindisi, it now belongs to Naples.

Apart from the first three cantos from Purgatory and the first and thirty-third cantos from Paradise translated recently by Nazario Napoli Bruno, we of Dantepoliglotta do not have to hand any translations in Neapolitan of these two canticles nor do we know if they were ever translated.

There is also no information about our two Neapolitan translators of Hell: Domenico Jaccarino (1840 – 1894), an original and brilliant nineteenth century gentleman who published a long list of titles in the frontispiece of his Dante popolare o la Divina Commedia in dialetto napolitano, and Matilde Donnarumma, a refined poetess who we suspect was a relative of the singer Elvira Donnarumma (1883-1933), a famous exponent of the Neapolitan song.

Some information about Domenico Jaccarino came to Dantepoliglotta in 2015 (click here).

April 2013. Dantepoliglotta received a very kind mail from Mrs Matilde Donnarumma, informing us that she is not a relative of the singer Elvira Donnarumma, as we thought, but a great-granddaughter of the publisher Luigi Pierro, owner of a prestigious publishing company that was active in Naples between the end of the nineteenth and the first decades of the twentieth century.  Matilde Pierro Donnarumma ended her translation of the Inferno in the first Sixties. The first cantos were published and distributed weekly in the news-stands starting on January 1965, and were advertized by the following leaflet: 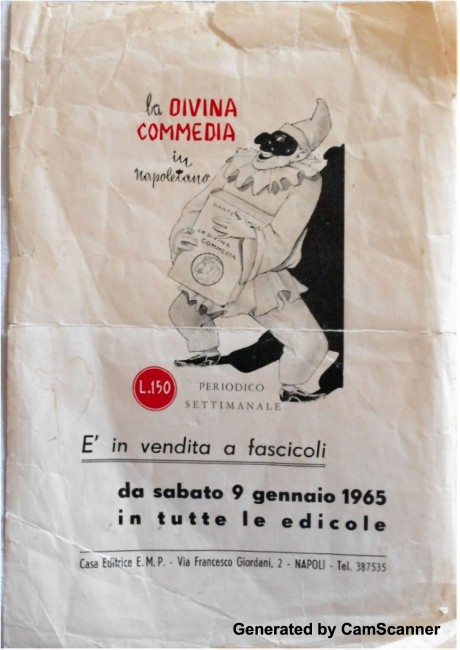 January 2016.-  Ms Matilde Pierro Donnarumma announced her translation into Neapolitan tercets of the Purgatory, now ready to be published. Click here if you want to read the translation of canto XXVI.  Matilde Pierro Donnarumma’s work is the issue of an article appeared on January 6, 2016, on Corriere del Mezzogiorno, Neapolitan supplement of Corriere della Sera (Click here).