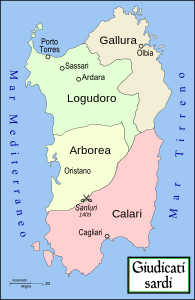 In Dante’s time Sardinia was divided into four autonomous kingdoms called “Giudicati”.  Loguduro and Gallura were in the northern part of the island and Arborea and Cagliari in the south.  In those days the Sardinian Giudicati, which already in the eleventh century had a close alliance with Genoa and Pisa in order to repel the Arab attempts to conquer the island, maintained close ties with the two maritime republics.  Gallura, in particular, from the twelfth century onwards was under the undisputed influence of Pisa and, from the beginning of the thirteenth century, was a personal inheritance of the Pisan Visconti family.

Nino Visconti, a contemporary and good friend of Dante’s, had been the the last head of Gallura and had governed up to the time of his premature death in 1296.  Dante meets his spirit in Purgatory (Canto VIII, verses 46-84) and turns to him most affectionately, promising to remember him to his daughter, Giovanna, after his return to the world of the living.   Nino Visconti also expresses to the poet his bitterness over the fact that his young wife, Beatrice d’Este

This is what these three verses (Purgatory, VIII, 79-81) sound like in the Logudoro dialect of Sardinian as translated by Pedru Casu:

And here you can read the same verses in the English translation of Allen Mandelbaum:

The serpent that assigns the Milanese
their camping place will not provide for her
a tomb as fair as would Gallura’s rooster.

Sardinia is also mentioned in Hell in the place where Dante and Virgil meet that singular person, Ciampòlo of Navarre.  We are in the fifth pit of the eighth circle where the swindlers, that is to say, the corrupt public bureaucrats, are paying for their sins, immersed in boiling pitch.  Ciampolo is one of the damned because, when he was in the service of King Theobald of Navarre, he had been guilty of embezzlement.  The two poets look at him while he, having imprudently emerged from the pitch, is ferociously punished by devils with spikes.

Despite this not being the most propitious moment for a conversation, Ciampolo takes the trouble to answer Virgil who wants to know if he is acquainted with some of the Italian swindlers in that pit.  And he tells him that he has been, up to a short time ago, in the company of two Sardinian swindlers deep down in the pitch, prior to having had the unfortunate idea of poking his head out of that liquid miasma.  The two corrupt public bureaucrats in question come, respectively, from the giudicato of Gallura and that of Logudoro: Friar Gomita and Michele Zanche.

Friar Gomita had been a senior bureaucrat in the service of Nino Visconti of Gallura and had made himself responsible for every type of fraud, up to the point of setting free, in exchange for money, certain enemies of his master who had been imprisoned; Michele Zanche, a representative of one of the richest families of Sassari, had been an officer in the service of King Enzo, the son of Frederick II of Swabia and husband of Adelasia di Torres, the queen of the giudicato of Logudoro (Hell, XXII, 81-90):

What follows are the same verses in the Sardinian Logudoro language of Barbagia.  The translation is by Paulu Monni, a native of Dorgali, that is to say an area of Barbagia which, in Dante’s time, was included in the Gallura giudicato:

There follow the same verses translated into the Loguduro dialect of western Sardinia by Pedru Casu:

And here are the same verses in the English translation of Allen Mandelbaum:

He answered : «Fra Gomita of Gallura,
who was a vessel fit for every fraud;
he had his master’s enemies in hand,
but handled them in ways that pleased them all.
He took their gold and smoothly let them off,
as he himself says; and in other matters,
he was a sovereign, not a petty, swindler.
His comrade there is Don Michele Zanche
of Logodoro; and their tongues are never
too tired to talk of their Sardinia […]».

[1] Not to be confused with the Beatrice d’Este of the same name who, two hundred years later, was the wife of the Milanese leader, Ludovico Sforza, known as “Il Moro”. 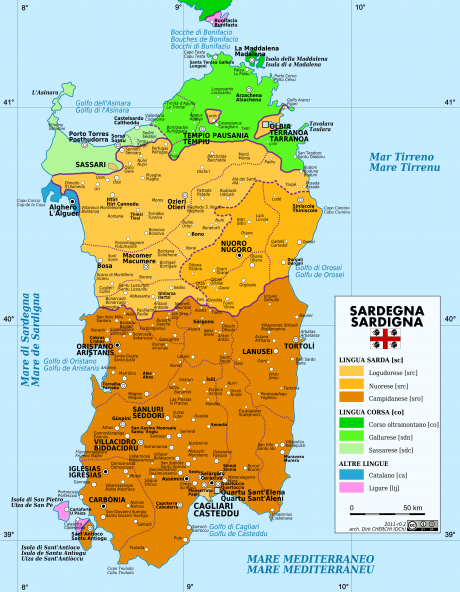