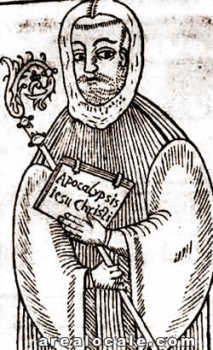 The abbot Joachim of Fiore, who was born near Cosenza (Calabria) around 1130, the founder of the monastery of San Giovanni in Fiore on the Sila mountains , is one of the blessed spirits of the Sky of the Sun, who are headed by St. Bonaventura da Bagnoregio. This holy soul introduces each one of his companions to Dante. The last ones being named by him are those who are respectively on his right and on his left: Rabano Mauro, most learned archbishop of Mainz in the ninth century, and precisely the Calabrese abbot Joachim, who had reputation as a prophet (Par., XII, 139-141):

Here are the same lines as translated into the Calabrese dialect by Salvatore Scervigni:

Here is Rabanus, and beside me here
Shines the Calabrian Abbot Joachim,
He with the spirit of prophecy endowed.