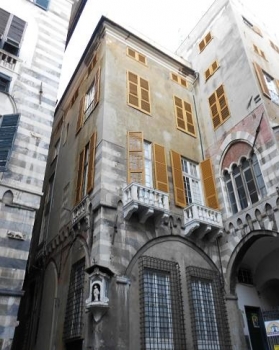 The souls of traitors of the guests are immersed in ice in the Tolomea (Cocytus). They are the only damned whose souls are thrown into the deepest part of the Hell immediately after committing their betrayal, while their body still survives for a certain time, being “occupied” by a devil. Among these souls Dante encounters Alberigo Manfredi, one of the Bolognese “jovial friars”, who was guilty of that sin having murdered two guests specially invited by him in his villa for dinner. Friar Alberigo himself reveals to Dante the peculiarity of the penalty reserved for those guilty of such an awful crime, and shows to the Poet the soul who is next to him, guilty of a similar crime as well: this is Branca Doria, a Genoese politician that had various assignments in Sardinia. Michele Zanche, the lord of Logudoro, a part of Sardinia, was Branca Doria’s father-in-law, and was invited to a banquet by him and slaughtered by his killers in 1275, in order to take possession of his domain. This is the reason for the severe words of Dante on Branca Doria and for his tirade against the Genoese.

In this page the relevant verses (Inf., XXXIII, 151-157) are shown both in the original language and in the Genoese translation of Federico Angelico Gazzo. 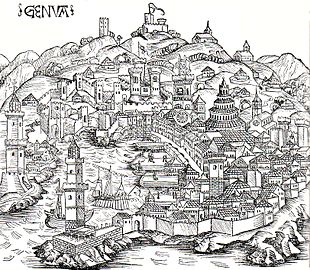 Here are the same lines in the English version of Henry Francis Cary.

Ah Genoese! men perverse in every way,
With every foulness stain’d, why from the earth
Are ye not cancel’d? Such an one of yours
I with Romagna’s darkest spirit found,
As for his doings even now in soul
Is in Cocytus plung’d, and yet doth seem
In body still alive upon the earth.