At Dante’s birth the city of Trieste was still governed by its bishops as a consequence of the privilege granted about three centuries earlier (to be precise, in 948) to the Trieste bishop, Giovanni III, by Lothario II, the king of Provence and Italy.  The episcopal power  was, however, in crisis owing to the enormous costs of the continuous wars with the Republic of Venice, to such an extent that, in 1295, the bishop, Brissa de Toppo, formally renounced his last prerogatives and ceded the governance of Trieste to the citizenry, which in the mean time had been constituted as a free municipality.  The free municipality remained as such throughout the first half of the 14th century,  notwithstanding the persistent hegemonic ambitions of Venice.

The city of Trieste is never mentioned in Dante’s works. 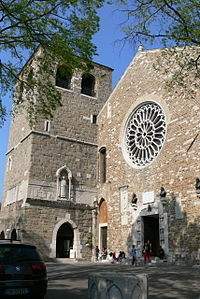 Trieste has been the birthplace of four people who have contributed to the studies of Dante and to the exposition of his works.

Saul Formiggini (1807-1873) was a Jewish writer and doctor whose name is linked to a translation of the Comedy into Hebrew, done between 1867 and 1869, the year in which the first part of the translation, relating to Hell, was published in Trieste.

Marco Besso (1843-1920) was an economist and he published studies about economic, social and political matters, without ever neglecting the study of Dante which was his real passion.  He collected innumerable editions, incunabula and translations of the Comedy with great diligence.  The Dante section became a considerable part of his library which is now under the care of the Marco Besso Foundation in Rome.

Luigi Polacco (1859-1924) is a man of letters who dedicated himself to the study of philosophy and Dante; in the latter field he published some studies of a didactic and expository nature.  Furthermore, he curated the Rimario (rhyming dictionary) of Dante’s poem (Milan, 1896).

Salomone Morpurgo (1860-1942), a philologist and librarian, made contributions to studies of Dante with numerous works, amongst which it is worth remembering in particular the discovery of the manuscript of the Detto d’Amore (“Love Ditty”), a little poem of 480 septenary verses attributed to Dante Alighieri  focusing on Courtly love (Amor cortese) published by Morpurgo himself in 1888 in the review Il Propugnatore.

The first example of translating an extract of the Divine Comedy into the Trieste dialect is credited to Giuseppe Stolfa (1856-1932) who translated the first canto of Hell in tercets and published it in 1918 in the Trieste review Umana.  Recently, in 1999, Nereo Zeper published in Trieste his complete version of Hell in tercets, which has been followed, in 2013, by that of Purgatory. Click here to listen to the dantean verses of Ulysses through Nereo Zeper’s voice, in the Trieste vernacular translation written by himself.