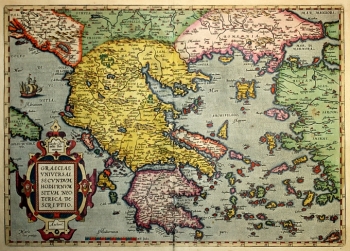 Dante, in his poem, often mentions Greece and the Greeks, yet always referring to classical times as, during Dante’s time, there was no Hellenic nation and the lands of today’s Greece were split among several states.  Especially frequent are references to the war of Troy, for example the one in which Dante recalls the situation of Greece during the conflict, when all men were at war and there were only children. That moment is lived in Canto twentieth of Hell (verses 106-111) when the two poets arrive at the bolgia of the soothsayers and see the damned obliged to walk with their head twisted backwards. Here Virgil shows Dante the Greek soothsayer Eurypylos who, together with colleague Calchas, had foretold the most favourable astrological moment to sever moorings and sail towards Troy.

Here Dante’s original verses are provided, followed by their translation into modern Greek done by the poet Nikos Kazantzakis.

Then said he to me: ‘He who from the cheek
Thrusts out his beard upon his swarthy shoulders
Was, at the time when Greece was void of males,
So that there scarce remained one in the cradle,
An augur, and with Calchas gave the moment,
In Aulis, when to sever the first cable.

Nikos Kazantzakis was an important Cretan story-teller, essayist and poet of the twentieth century.  His renown beyond the shores of his native land, linked almost exclusively to his novel Zorba the Greek, does not do justice to his real literary merits.  His translation of the Divine Comedy into fluent hendecasyllables in demotic Greek (which is to classical Greek what Dante’s superior vulgate was to Latin) is enormously effective and has prompted someone to say that Kazantzakis’s approach to Dante’s verses is marked by a “coarse style in aggressive demotic Greek”.[2]

Kazantzakis managed to translate the Divine Comedy in an exceptionally short time during the year 1932.  But in that period the Cretan poet was already about to prepare his most ambitious work: a poem of over 30,000 lines published in 1938 under the title Ὀδύσσεια (Odyssey), substantially a sequel to Homer’s great poem.  Now, we do not know whether the author of this new Odyssey was prompted by the twenty-sixth canto of Hell in which Dante meets the great Greek hero Ulysses amongst the fraudulent counsellors of the eighth circle, but the fact remains that Kazantzakis’s Ulysses, just like Dante’s, also undertakes a new, long voyage after his return from Troy to Ithaca, and meets a death which is as violent as it is glorious: for Kazantzakis he is killed by an iceberg after reaching the Antarctic; for Dante he dies in a shipwreck with all his companions while facing up to the Pillars of Hercules.

So here, then, it is natural to re-read Dante’s verses in which Ulysses narrates in the first person the matter of his last voyage (Hell, XXVI, 106-142) followed by the same verses by Dante translated into modern Greek by Nikos Kazantzakis: 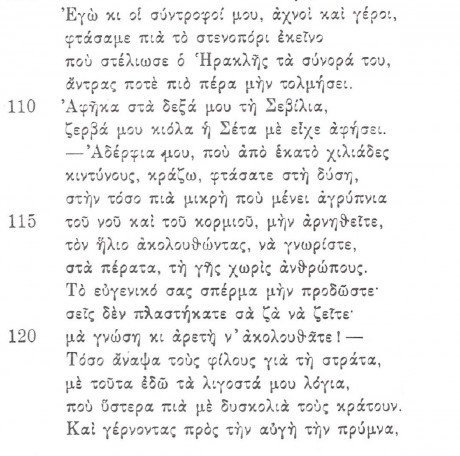 And I and my companions were already
old and slow, when we approached the narrows
where Hercules set up his boundary stones
that men might heed and never reach beyond:
upon my right, I had gone past Seville,
and on the left, already passed Ceüta.
‘Brothers,’ I said, ‘o you, who having crossed
a hundred thousand dangers, reach the west,
to this brief waking-time that still is left
unto your senses, you must not deny
experience of that which lies beyond
the sun, and of the world that is unpeopled.
Consider well the seed that gave you birth:
you were not made to live your lives as brutes,
but to be followers of worth and knowledge.’
I spurred my comrades with this brief address
to meet the journey with such eagerness
that I could hardly, then, have held them back;
and having turned our stern toward morning, we
made wings out of our oars in a wild flight
and always gained upon our left-hand side.
At night I now could see the other pole
and all its stars; the star of ours had fallen
and never rose above the plain of the ocean.
Five times the light beneath the moon had been
rekindled, and, as many times, was spent,
since that hard passage faced our first attempt,
when there before us rose a mountain, dark
because of distance, and it seemed to me
the highest mountain I had ever seen.
And we were glad, but this soon turned to sorrow,
for out of that new land a whirlwind rose
and hammered at our ship, against her bow.
Three times it turned her round with all the waters;
and at the fourth, it lifted up the stern
so that our prow plunged deep, as pleased an Other,
until the sea again closed-over us.”

[1] In order to read a different  modern Greek translation of the same verses, done by the poet Geōrgios Kalosgouros, click here.