The great English poet, George Gordon Byron (1788-1824) was a free and troubled spirit who, in the spring of 1819, in the Venice salon of the Countess Benzoni, became acquainted with Teresa Gamba, a young scion of a patrician family from Ravenna.  Teresa was 19 years old and had been married off to Count Alessandro Guiccioli, more than 40 years her senior, also from Ravenna.  A most beautiful love affair started between Lord Byron and Teresa Guiccioli which was destined to last a lifetime, both for the poet who, however, died young just four years later, and for Teresa who lived alone for twenty-seven years after Byron’s death like an inconsolable widow.  Only late in life did she remarry, to a French noble, but it was a marriage of convenience and her heart continued to beat for her George who had disappeared prematurely.

The relationship with Countess Guiccioli had already led Byron to move to Ravenna in 1819.  The couple remained there for two years (Teresa had in the mean time separated from her ancient husband), then to Pisa and subsequently to Livorno. 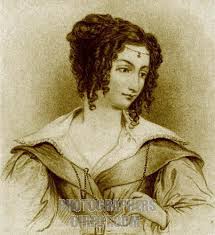 His passion for his young lover naturally had an influence, to some extent, on Byron’s creativity.  And up to a point that passion, combined with the great admiration that the poet harboured for Dante’s work, drove Byron to translate into English – in Ravenna in March 1820 – the very verses of Dante’s relating to the affair of Paolo and Francesca.  Moreover, just like Francesca, Teresa too was from Ravenna, was bound by a marriage which had been arranged with an unwanted husband and, last but not least, she loved Byron, a modern Paolo Malatesta, and was loved back by him.

For more information on the love story of George Byron and Teresa Guiccioli click here and here.  To gain access to the dramatic work Byron by the playwright Giovanni Spagnoli of Romagna, based on that affair, click here. For information on the staging of this drama by the company of Piccolo Teatro Città di Ravenna (directed by Roberto Battistini, with Alessandro Braga and Giovanna Maioli), click here.

And here are Dante’s verses about Paolo and Francesca translated into English in tercets by Lord Byron:

“The Land where I was born sits by the Seas
Upon that shore to which the Po descends,
With all his followers, in search of peace.
Love, which the gentle heart soon apprehends,
Seized him for the fair person which was ta’en
From me, and me even yet the mode offends.
Love, who to none beloved to love again
Remits, seized me with wish to please, so strong,
That, as thou see’st, yet, yet it doth remain.
Love to one death conducted us along,
But Caina waits for him our life who ended:”
These were the accents uttered by her tongue.—
Since I first listened to these Souls offended,
I bowed my visage, and so kept it till—
‘What think’st thou?’ said the bard; when I unbended,
And recommenced: ‘Alas! unto such ill
How many sweet thoughts, what strong ecstacies,
Led these their evil fortune to fulfill!’
And then I turned unto their side my eyes,
And said, ‘Francesca, thy sad destinies
Have made me sorrow till the tears arise.
But tell me, in the Season of sweet sighs,
By what and how thy Love to Passion rose,
So as his dim desires to recognize?’
Then she to me: ‘The greatest of all woes
Is to remind us of our happy days
In misery, and that thy teacher knows.
But if to learn our Passion’s first root preys
Upon thy spirit with such Sympathy,
I will do even as he who weeps and says.
We read one day for pastime, seated nigh,
Of Lancilot, how Love enchained him too.
We were alone, quite unsuspiciously.
But oft our eyes met, and our Cheeks in hue
All o’er discoloured by that reading were;
But one point only wholly us o’erthrew;
When we read the long-sighed-for smile of her,
To be thus kissed by such devoted lover,
He, who from me can be divided ne’er,
Kissed my mouth, trembling in the act all over:
Accurséd was the book and he who wrote!
That day no further leaf we did uncover.’
While thus one Spirit told us of their lot,
The other wept, so that with Pity’s thralls
I swooned, as if by Death I had been smote,
And fell down even as a dead body falls.”

Jane Edwards has lent her voice to Francesca da Rimini and read the relevant verses (97-142) in the English translation of George Gordon Byron.
To listen to this reading click here below: