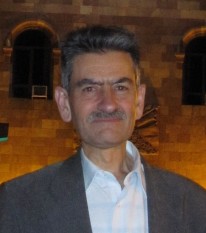 Hovhannes Tiracujan was born in the town of Erevan (Armenia) in 1954.  He studied in the Medical University of Erevan up to 1978.  He works as a specialist public health doctor in an urban epidemiological unit.

Ever since childhood one of his hobbies has been world history and the history of ancient Armenia.  He also likes music and literature.

In 1985 he became interested in the International Language and studied it in a group taught by his future wife.  He now has an Esperantist family:  his wife and daughter.  He has taken part in Esperantist events in various countries such as Russia, Lithuania and Cuba, is active in the movement in Armenia since 1986 and translates various pieces of historical information from Armenian into Esperanto.

Hovhannes Tiracujan has lent his voice to Ulysses and read the relevant verses (Hell, XXVI, 91‑142) in the translation into Armenian by Arpun Dayan.

In order to read the Armenian verses in Latin transcription while you are listening to the reading, click here and operate the audio file from the text page.