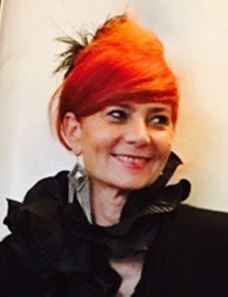 Ghislaine Avan is a French multidisciplinary artist, born in Châtellerault, Vienne department. Choreographer, tap dancer and contemporary dance performer, videographer, video and film editor, she makes a path of life of her art.

In 1995 she is in New York taking classes from the great tap dancer Chuck Green and obtains in the year 2000 the Fulbright student grant to further develop her technique with Roxane Butterfly. In 1997 Ghislaine Avan creates the Compagnie Tempo Cantabile, a public utility association, which specializes in the performing arts sector, with herself as the art director. In the framework of her Compagnie, Ghislaine renews the choreographic language of tap dance. Her involvement touches equally the worlds of contemporary dance and contemporary music and she collaborates with many musicians like Claude Barthélemy, Lorenzo Pagliei, Ramón Lopez, Hélène Breschand and Alexandre Yterce. On the latter’s music she realizes in 2006 the choreographic performance “Threshold”, from which the image below is taken. 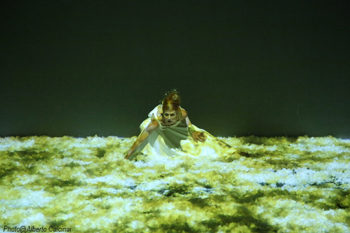 For her choregraphy research, she obtains support in France from institutions such as the Ministry of Culture, the Pays de la Loire Region, the City of Le Mans, the General Council of Val-de-Marne and others.

In 2006 Ghislaine Avan started a multimedial work based on Dante Alighieri’s Divine Comedy, from which the so called “Le LA du Monde“ project derived. This is a film in progress: since 2006 Ghislaine filmed a multitude of men and women all over the world who read a passage from the Divine Comedy, each in his own language. So far, she has taken about two thousand people, in almost fifty different languages and dialects and in more than six hundred places. The aim is that all continents be represented.

The title of the project contains several meanings: the LA of the world, as a starting point of everything, but also as the solfège note to which anything else should be tuned up. The final goal is 2021, to set up, on the seventh centenary of Dante’s death, a world installation titled “Divine Babel”: a great deal of passages taken from the hundred cantos of the Comedy, collected in a 24 hour film, and read by people all over the world, from different backgrounds and nationalities and in different languages.

Ghislaine Avan has lent her voice to Francesca da Rimini and read the relevant verses (88-142) in the French translation by André Pératé.
To listen to this reading, click here below:

Ghislaine Avan has lent her voice to Francesca da Rimini and read the relevant verses (88-142) in the French translation by Lucienne Portier.
To listen to this reading, click here below: