Francesca and Ulysses in Milanese

Francesca and Ulysses in Milanese

In Dante’s day, the lord of Milan was Matteo I Visconti who extended his dominion over the whole of Lombardy and the surrounding regions during his domination, taking in even Bologna and Genoa.  The illustration shown on this page represents the bas-relief with the coat of arms of Matteo Visconti which appears on the outer walls of the basilica of St Eustorgio, one of the most ancient and famous churches of the Lombard metropolis. 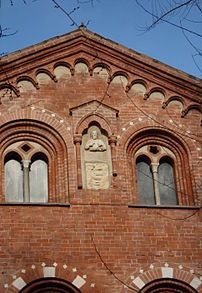 The cult of Dante, which goes back quite a long way in Milan, also involved the said Visconti family which remained in power up to the middle of the 15th century, so the Divine Comedy was the preferred reading matter of its last overlord, Filippo Maria Visconti.

It is not very surprising, therefore, if the Milanese dialect is the one which, amongst the various regional dialects of the Italian language, has been used the most for translations of the Divine Comedy.  Even if Dante, for his part, regarded it as one of the ugliest Italian dialects and wrote that, with little restraint, in his work De Vulgari Eloquentia.  The Milanese dialect poets are clearly not particularly touchy.

Here is the page of De Vulgari Eloquentia (Book I, Chapter XI), where the Milanese dialect is dealt with, in the Italian translation by Gian Giorgio Trissino (1529), a humanist from Vicenza:

The first one to get stuck into the task of translating Dante’s poem into Milanese around 1805 was Carlo Porta, decidedly the greatest of the Milanese dialect poets of all time, but he only translated the very first cantos of Hell.

As for Francesca da Rimini, Carlo Porta limited himself to translating these sixteen verses (Inf., V, 127-138) which are, however, an authentic little masterpiece: 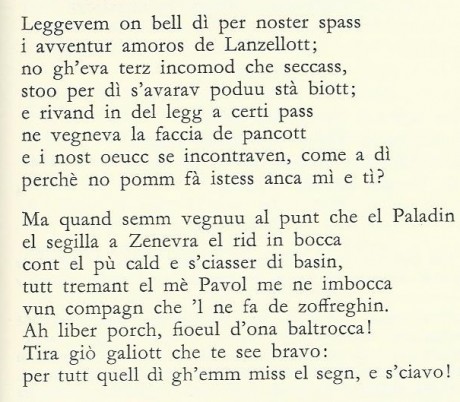 To listen to the reading of these verses by the voice of Giuliano Turone, author and responsible of Dantepoliglotta web-site, click here below:

The first one to translate into Milanese the entire cantica of Hell was Francesco Candiani who dedicated his work, in 1860, to General Giuseppe Garibaldi.

To read the verses of Francesca da Rimini (Inf., V, 88-142) in the Milanese translation of Francesco Candiani, and to listen to its reading by the voice of Alma Brioschi, click here.

To listen to Alma Brioschi’s reading directly click here below:

To see the page of Alma Brioschi click here.

During the 20th century the entire Comedy of Dante was translated into Milanese twice:  by Giuseppe Monga (1947) and by Ambrogio Maria Antonini (2004).

To read the verses of Ulysses (Inf., XXVI, 90-142) in the Milanese translation of Ambrogio Maria Antonini, and to listen to its reading by the voice pf Elio Aldrighetti, click here.

To listen to Elio Aldrighetti’s reading directly click here below:

To see the page of Elio Aldrighetti click here.