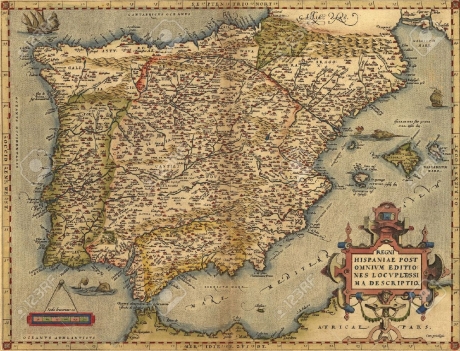 Spain is mentioned several times in the Divine Comedy. Sometimes Dante mentions it or local Spanish locations with the sole purpose of making a geographical reference, as when Ulysses, in describing his journey towards the Pillars of Hercules, says that he went near the coasts of Spain and Morocco and saw Seville to his right and Ceuta to his left (Hell XXVI, 103-104, 110-111):

I saw as far as Spain, far as Morocco,
along both shores […];
upon my right, I had gone past Seville,
and on the left, already passed Ceüta.

On other occasions Dante mentions Spanish locations in the context of fairly complex astronomical circumlocutions, as when Virgil, in order to let Dante know that it is six o’clock in the morning, tells him that the moon is now touching the horizon and is about to disappear beneath the sea at Seville (Hell XX, 124-126):

[…] already
is at the border of both hemispheres
and there, below Seville, touches the sea.

But, of course, in the Divine Comedy there is no lack of references to people and facts which relate to Spanish matters and political and cultural vicissitudes.

Thus, in Canto XII of Paradise, on the occasion of the encounter between Dante and Beatrice with the blessed wise spirits of the Sun’s heaven, we find a long and passionate panegyric of Saint Dominic of Guzmán, delivered by the great Franciscan Bonaventura da Bagnoregio. At this point Dante remembers the small Spanish village of Caleruega near Burgos, by him Italianised into Calaroga, place where Saint Dominic was born. To better identify the location, Dante briefly dwells upon the geographic description of the place, situated on that part of the Iberian peninsula where the Zephyr is born, the spring wind that awakens vegetation in the whole of Europe. A location not far from the Atlantic coast, a place where the sun sets behind the waves, after its long journey across the day.

Here you find the relevant verses (Par., XII, 46-57) in Dante’s original setting, ensued by the Spanish translation by Ángel Crespo. Follows the English version of Allen Mandelbaum. Below can be seen a sight of Caleruega and the picture of the King of Castile’s shield.

In that part of the West where gentle zephyr
rises to open those new leaves in which
Europe appears reclothed, not far from where,
behind the waves that beat upon the coast,
the sun, grown weary from its lengthy course,
at times conceals itself from all men’s eyes
there, Calaroga, blessed by fortune, sits
under the aegis of the mighty shield
on which the lion loses and prevails.
Within its walls was born the loving vassal
of Christian faith, the holy athlete, one
kind to his own and harsh to enemies. 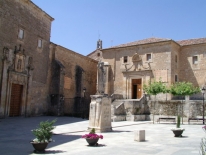 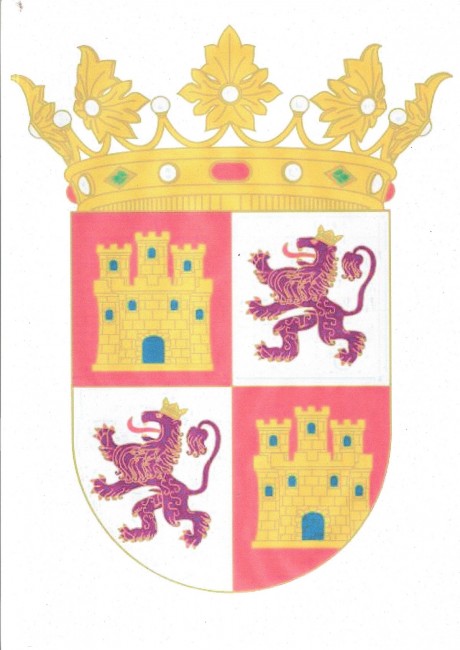 Dante did not harbour much respect for the then king of Castile, Ferdinand IV, who ascended the throne in 1295 at the age of nine years under the regency of his mother Maria de Molina. In fact Ferdinand IV is one of the sixteen reigning European Christian monarchs who are included (without a specific justification) in the ferocious invective of the celestial Eagle, perhaps for the simple reason that this Castilian sovereign, who was declared an adult at the age of fifteen years, had reigned under the protective wing of his energetic mother and died prematurely without having had the time to complete any significant undertakings.

These are Dante’s verses which concern king Ferdinand IV of Castile (Paradise XIX, 124-125):

What shall the Persians say to your kings there
when the Great Book is opened and they see
the sum of their depravities laid bare?
………………
There, the debaucheries and the vain show
of the Spaniard […] who knew
nothing of valor, and chose not to know. 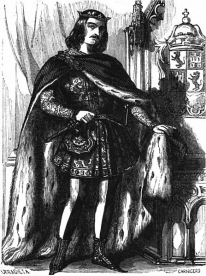 In Dante’s day the territory of present-day Spain was divided into various kingdoms each one independent of the other (Castile, Navarre and Aragon, the latter also including Catalonia), while the southern part was still in Arab hands (the kingdom of Granada). Now, amongst the Iberian sovereigns of the time the only one which the poet deemed to be a good one was Theobald II (1238-1270), the king of Navarre who inter alia had passed legislation (Fuero general de Navarra) which was fairly advanced for its time.

Dante refers indirectly to king Theobald II when he arrives in the circle of Hell in which the swindlers, that is to say, the corrupt public functionaries, are paying for their crimes in boiling pitch. It is here that Ciampólo di Navarra, one of the damned, talks to Dante and tells him that, when he was in the service of the “good king” Theobald II, he was guilty of acts of embezzlement harmful to the sovereign (Hell XXII, 52-54).

Here are the same verses in the Spanish translation by Ángel Crespo:

Then I was in the household of the worthy
King Thibault; there I started taking graft;
with this heat I pay reckoning for that. 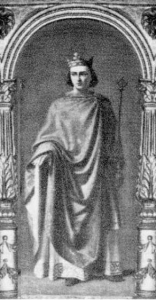 Navarre then provides Dante with the opportunity to hurl one of his gibes against the then king of France, Philippe Le Bel, whom the poet warmly detested. Once again Dante uses the ferocious invective of the celestial Eagle to desire that Navarre may know how to use the mountains which border it – i.e. the Pyrenees – as a weapon of defence in order to avoid annexation with France, something strongly desired by the hated Philippe (Paradise XIX, 142-144):

The same verses in the Spanish translation by Ángel Crespo:

[…] Happy Navarre
were she to make her peaks a fortress wall!

The first translation of the Divine Comedy into Spanish is due to a XV century Castilian noble, Enrique de Villena, also known as Enrique de Aragón (1384-1434). It is a prose translation finished in 1428 which has been published in print only in 1974 at Salamanca and whose manuscript – preserved in Madrid in the Biblioteca Nacional de España – has been digitized and made available on line (click here): the manuscript contains Dante’s original text in the centre of each page while the Castilian translation appears in the margins.

We reproduce here the first page of the manuscript with the beginning of the poem. And you can see below the detail of the first six tercets of Hell, translated by Enrique de Villena: the image taken from the manuscript is placed side by side with the text drawn from the Salamanca edition of 1974. 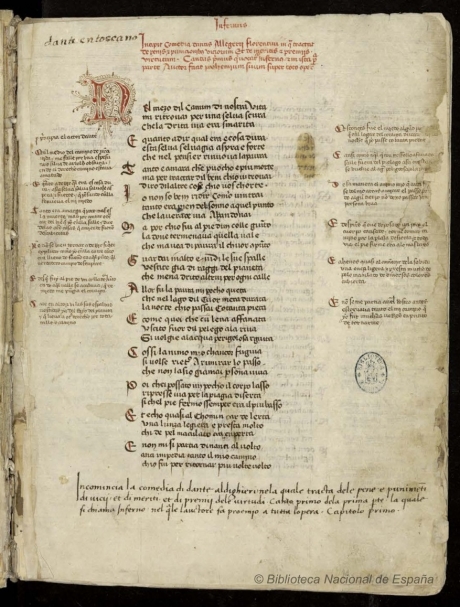 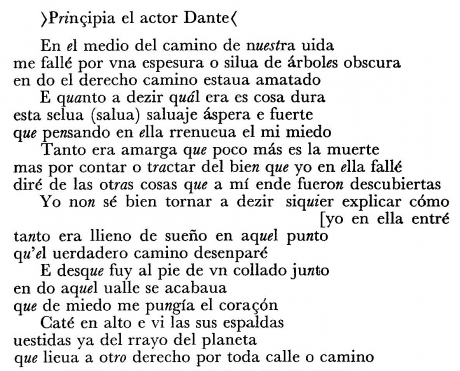 While Enrique de Villena was working in Castile on his prose translation of Dante’s poem, Andreu Febrer (1375-1440), a diplomat and poet born in Vic, was doing the same in Catalonia – but translating into Catalan. His translation is in tercets and was finished in 1429, so just one year after his, let’s say, “Castilian counterpart”. It came down to us in a single manuscript preserved in Madrid in the Biblioteca del Escorial. It was only published in print in Barcelona in 1878 and a second time in 1974. 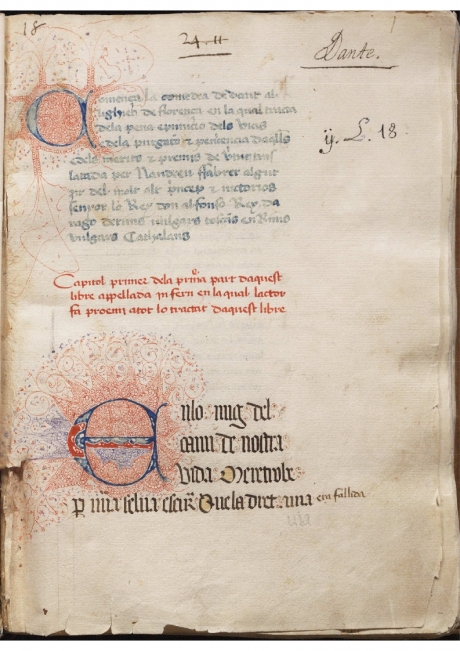 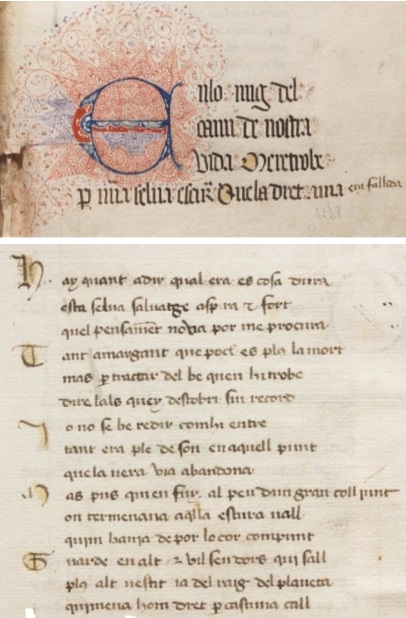 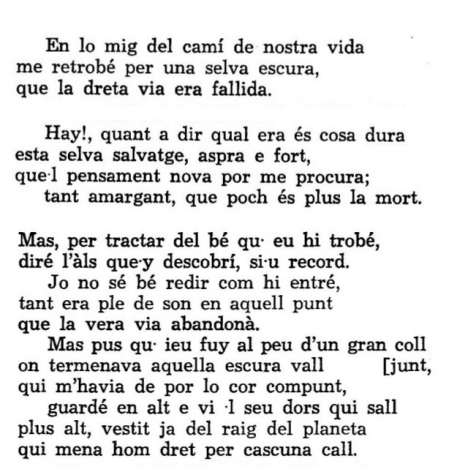 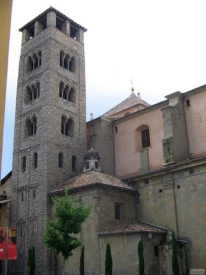 But Spain boasts another first for Dante: in 1515 in Burgos the Castilian verse translation of Hell is printed thanks to Pedro Fernández de Villegas (1453-1536), a humanist and clergyman, archdeacon of Burgos cathedral, born in that town. Well, Villegas’s translation of Hell is the absolutely first one in the world which was published in print.

In the Burgos edition the verses are accompanied by a long commentary, drawn in part from that of Cristoforo Landino, published in Florence in 1481. The meter used by Villegas is the copla de arte mayor, the octave of dodecasyllables with alternating rhymes (ABBAACCA), much favoured by various Spanish poets in the Golden Century.

The 1515 edition is just about unfindable on the antiquarian market and it is also difficult to find in libraries. A single example is preserved in the public library in Burgos where it has been digitized and made available on line (click here). This translation of Hell was republished in Madrid in 1868 without the long commentary and has also been digitized and made available on line under the aegis of the Biblioteca Nacional de España (click here).

Many other translations into Spanish, both in prose and verse, have been published from the middle of the nineteenth century onwards. Some of them are present on this website (click here). Others will appear in the future. We at Dantepoliglotta believe that the finest translation of the Divine Comedy into Spanish is the one in tercets by the poet and literary critic Ángel Crespo (1926-1995), published in Barcelona in three volumes in, respectively, 1973, 1976 and 1977.

Cristina Gimeno has lent her voice to Francesca da Rimini and read the relevant verses (Inferno, Canto V, 88-142) in the Spanish translation of Ángel Crespo.

Pedro Reula Baquero has lent his voice to Ulysses and read the relevant verses (Inferno, Canto XXVI, 90-142) in the Spanish translation of Ángel Crespo. 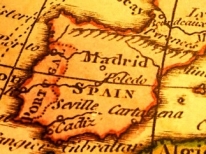