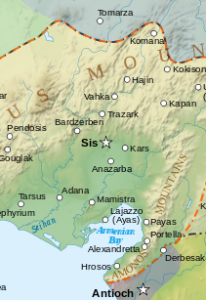 At the time of Dante modern Armenia was dominated by the Saljuq Turks, but there was an Armenian kingdom of Cilicia (also known as Little Armenia) created by Armenian refugees and located on the gulf of Alessandretta.

Knowledge of the works of Dante was introduced into Armenian literature by the Mechitarist monks of the monastery of the same name, founded in 1715 in Venice on the island of San Lazzaro by the Armenian monk, Mekhitar.

Visit the web page of Hripsime  Rita Mkrtĉjan, who has lent her voice to Francesca da Rimini and read the relevant verses (Hell, V, 88-142) in the translation into Armenian by Arpun Dayan.

Visit the web page of Hovhannes Tiracujan, Rita’s husband, who has lent his voice to Ulysses and read the relevant verses (Hell, XXVI, 91‑142) in the translation into Armenian by Arpun Dayan.