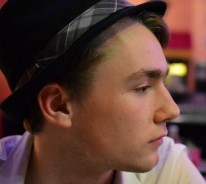 Clarence Johns was born in 1994 at Portland, Oregon, USA.  Since his high school years, at Lincoln High School, Clarence became very fond of theatre and performed the classic roles of Macduff in Macbeth and Algernon in The Importance of Being Earnest among others. After playing the part of Blue in student-written play Thrown in the New Works young playwrights festival as a sophomore, Clarence applied to write for the following years. In 2010, he wrote his first play Postal which premiered at Lincoln High School and was restaged at the Fringe Festival in Edinburgh, Scotland. In 2012, Clarence’s first full-length play Chameleon premiered at Lincoln High School. At Sarah Lawrence College, Clarence has acted in two productions, The Good Mother and Dead City in 2013, as well as numerous short student-written films. He made his voice acting debut in Emily Trueswell’s Fishkill. Clarence is currently a Junior at Sarah Lawrence, studying Theatre and Art History.

Clarence Johns has lent his voice to Ulysses and read the relevant verses (Hell, XXVI, 90-142) in the translation into English by Allen Mandelbaum.
To listen to this reading click here below: