And still the mode offends me

Home/Video/And still the mode offends me

And still the mode offends me 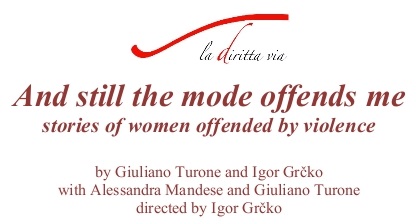 TO SEE THE TRAILER OF THE PERFORMANCE CLICK HERE

CLICK HERE TO SEE
THE PLAYBILLS OF NEXT PERFORMANCES 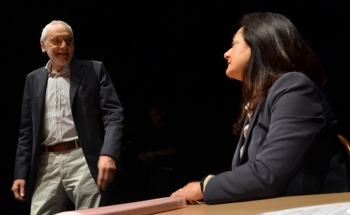 It is not by chance that this theatrical presentation of “gender” violence, in Italian, which unfolds in a dialogue between a slightly eccentric professor and a willing lady pupil who aspires to become a lecturer in “education for gender equality”, opens with Dante’s verses dedicated to Francesca da Rimini. In fact, Francesca underwent more than one type of gender violence: marriage to the abhorrent Gianciotto Malatesta which was forced on her by means of treacherous deceit, the constraint of then continually undergoing her husband’s tyrannical and unwanted violent attentions and, finally, her death at the hands of that husband after he had discovered her relationship with his brother, Paolo.

Francesca da Rimini’s sad tale has inspired many other poets and artists who have wanted to express their solidarity with the unfortunate heroine in various ways. Amongst those authors we also find Gabriele D’Annunzio who, in his tragedy Francesca da Rimini does not fail to pillory the web of evil deceit which is used to bring down the girl and he also emphasizes the substantially complicit role in the plot played by the handsome Paolo.

It is a story, that of Francesca da Rimini, which seems ideal for a voyage into modern day reality. And here we are, then, with the current, innumerable, ever growing instances of violence against women which range from the most varied forms of abuse right up to homicide.

Dante, a universal poet, prompts us to reflect on the universality of violence against women and the necessity of a cultural battle with equally universal reach against this detestable phenomenon.

If you wish to have more information about this performance, please see the Italian page.

To listen to the presentation of the show in a radio broadcast of Serena Dandini (in Italian), click here.