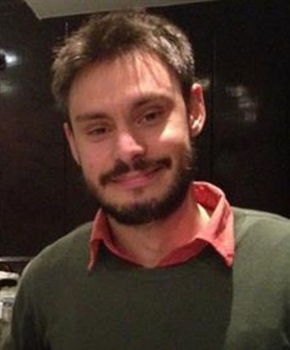 Regeni was a PhD student at Girton College, Cambridge, researching independent trade unions. He grew up in Fiumicello, a town in the Udine province of North East Italy.

Regeni was brutally tortured to death: his recovered body had bruises and abrasions all over from a brutal beating, all fingers had been broken, fingernails and toenails ripped out, seven broken ribs, signs of electrocution on the genitals, lacerations from a razor-like implement over the entire body including the soles of the feet, multiple stab wounds, ears cut off, cuts to the nose, extensive cigarette burns, a brain haemorrhage and extensive bruises from kicks and beatings. His body was found alongside a desert road. Due to his research activities and left-wing political leanings, the security services of Abdel Fattah al-Sisi are suspected of involvement in his murder.

The killing sparked an international outrage.

Taken from Wikipedia in English. Click here to see the whole article.

Click here to see the Wikipedia article in Arabic.

There is a scene filled with terrifying suspense in the 1995 French film La Haine. Police have detained two young men, having found them to be in possession of a small piece of hashish.
They sit handcuffed to their chairs, side by side, as two cops beat and harass them. A third policeman, who is new to the job, sits and observes. This is a sort of training for him, a demonstration of how to effectively use violence.
“They could be free in two hours, we gotta use our time wisely,” one of the policemen says to his new colleague. “You stay in control the whole time… the hard part is stopping in time, you can’t go too far.”
It has been over a week since Italian student Giulio Regeni’s body was discovered, tortured and broken, off a highway outside Cairo. Reports from Egypt and Italy indicate that he was taken in by police on the night he disappeared, although the Ministry of Interior has denied this.
At a memorial for Regeni in front of the Italian embassy in Cairo, an Egyptian man held up a sign written in Arabic which read “Giulio was one of us, and he died like one of us.” A message of solidarity, but also, an attempt to remind the world that Regeni’s death belies a wider crisis.
For months, Egyptian human rights groups and activists have been speaking out about a marked increase in police brutality in the country.
The Al Nadeem Center for the Rehabilitation of Victims of Violence reported more than 600 cases of torture in 2015. The Egyptian Initiative for Personal Rights documented 14 deaths of detainees in a single police station over a two year period.
Enforced disappearances – when individuals are arrested by security forces and then cannot be found for days, weeks or in some cases, years – have also increased.
The victims have included other expatriates. In 2013, a Frenchman and long-time resident of Cairo was also killed in police custody.
Amid so many stories of brutality, Regeni’s death strikes a nerve because he was a foreign visitor to Egypt. Protection from police violence comes not from the law, but from a calculus of privileges tied up with class, race and geography that should have made Regeni – a white European in downtown Cairo – immune to the violence inflicted on Egyptians. This was not supposed to happen to him.
That it did happen, to him and so many others, is a result of years of impunity for a security apparatus trained to break people, with no consequence or accountability to the public.
These are the same security forces allegedly contracted to torture people in Egyptian prisons and barracks as part of an extraordinary rendition program.
Former CIA agent Robert Baer is quoted as saying: “If you want a serious interrogation, you send a prisoner to Jordan. If you want them to be tortured, you send them to Syria. If you want someone to disappear – never to see them again – you send them to Egypt.” These are the same security forces that killed nearly a thousand people in a single day on 14 August 2013 – and then arrested anybody who dared speak out about it.
The government maintains that cases of torture and police brutality are “exceptions”. Cases against police officers that do make it to court often end in a dismissal of charges or reduced sentences.
Unlike the French policemen in La Haine, these cops can go as far as they want to.
Regeni went missing on 25 January, the fifth anniversary of the 2011 revolution that removed President Hosni Mubarak from office. The trigger of the revolution was police brutality. Protesters burnt nearly 100 police stations to the ground, and rallied around the figure of Khaled Said, a young man who had been beaten to death in custody.
In a grotesque intersection of past and present, the officer in charge of the preliminary investigations into Regeni’s death has a previous conviction: for complicity in the abduction and torture – to death – of an Egyptian man in 2003.
The police force that inspired such rage has gone unreformed, unchanged. No one is safe.

The Arabic translation of Hell, Canto V, verses 119-120, that appears on this page, is part of the Arabic edition of the poem due to the Egyptian professor Hassan Osman (click here)