This is a civil theater show named “The Path Direct – The Constitution and Dante Alighieri without distinction of race or language” of and with Giuliano Turone and with Mirko Lodedo at the piano.

The show was produced by Armamaxa Teatro and was represented for the first time on April 25, 2010 at the Municipal Theater of Ceglie Messapica, in the framework of a week of events dedicated to the defense of the Italian Constitution, human rights and the rule of law. It was then repeated on several occasions and in various places, each time with some updating changes, until March 2013.

The video accessible from this web site brings you into the original performance of 2010 in Ceglie Messapica. If you wish to see a more recent version (Casalecchio di Reno, November 19, 2012) click here. 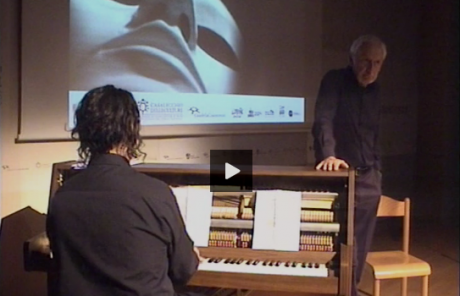 The spirit of the show, which takes up a few ideas from the previous monologue “glottis”, is reflected in the restatement of the universality of Dante and the idea of exploring a new parallelism between our two fundamental Charters: the Divine Comedy («Ye were not form’d to live the life of brutes, but virtue to pursue and knowledge high»

[Cary’s translation]) and the Constitution («The Republic [of Italy] recognizes and guarantees the inviolable rights of human beings and requires the fulfilment of the unbreakable duties of solidarity»).

About the Italian Constitution:

The text of the Italian Constitution:
http://www.quirinale.it/qrnw/statico/costituzione/costituzione.htm

The link to the site of the association Libertà e Giustizia:
http://www.libertaegiustizia.it/

The Italian Constitution in English:
http://www.quirinale.it/qrnw/statico/costituzione/pdf/costituzione_inglese_01.pdf

The Italian Constitution in Esperanto:
http://eo.wikisource.org/wiki/Itala_Konstitucio 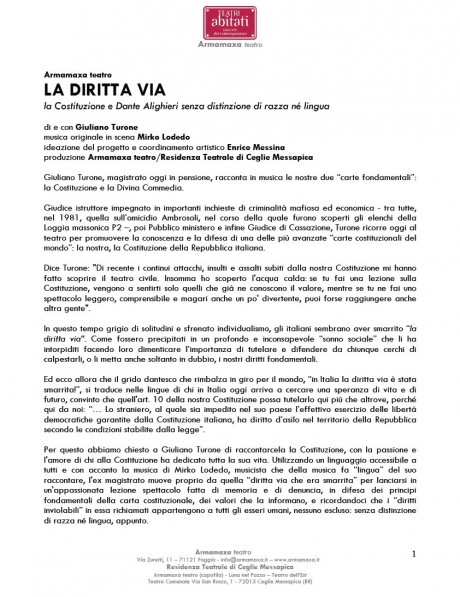