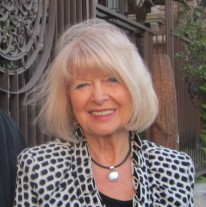 Jacqueline Risset, French poet and essayist, suddenly deceased in Rome on September 3, 2014, was Emeritus Professor of French Literature and President of the Centre for Italo-French studies at the University of Rome Three.  She has been a member of the editorial committee of “Tel Quel”, a representative of Italy over the constitution of the European University in Paris, and a delegate of the French Ministry of Culture in the “Commission for the Defence of the French language”.  She has conducted courses at Berkeley University of California, Columbia University, the French School of Political Science and the Collège de France.  She is a member of the Dante Society of America and a counsellor for Rome’s Casa di Dante.

Among her books of poetry: Petits éléments de physique amoureuse (1990), Amor di lontano (1993), The translation begins (1996), Les instants (2000).  She has translated the Divine Comedy into French (1985-1990), now in its sixth edition and also published with the unabridged, re-edited drawings by Botticelli (Diane de Selliers, 2000 and 2005), as well as in 2003 with Miguel Barcelo’s original illustrations.  Besides this, she has translated into French Machiavelli’s The Prince (Actes Sud, 2000) and extracts from Zanzotto, Leopardi, Belli, and Balestrini; and in Italian Il partito preso delle cose  by Francis Ponge (1997) and texts by Bonnefoy, Sollers, Pleynet, and Roche.

In collaboration with French and Italian theatrical actors (Gérard Desarthe, François Joxe, Anna Proclemer, Valérie Dréville, Roberto Benigni, Eric Genovese, Annie Brissier) she has promoted numerous readings of cantos from the Divine Comedy from 1986 to the present day.  On 16 May 2004 her translation of the entire poem was recited in a single session (from 2 to 10 p.m.) by the whole team of actors, at the Comédie Française in Paris.

She has received recognition from the Société des Gens de Lettres, the Accademia dei Lincei, the Consiglio dei Ministri della Repubblica Italiana, the Fondazione Sapegno, the Académie Française, the Société Roger Caillois, and the “Fiorino d’oro” of the city of Florence. In  2007 she was selected to take part in Dante’s celebrations  of the Festival d’Avignon.

She recently published in Italy a bilingual anthology of her poems (Il tempo dell’Istante. Poesie scelte 1985-2010, Einaudi 2011) and in France the novel Les instants les éclaiirs (Gallimard 2014).  Just a few weeks before her death she has completed her translation of Dante’s Rime (Flammarion, October 2014).

Jacqueline Risset has lent her voice to Francesca da Rimini and read the relevant verses (Inf., V, 88-142) in the French translation written by herself.