A page of Almagest in Arabic

Dante did not speak Arabic and could not have been familiar with mediaeval Arab-Islamic literature which in his day had had no contact with mediaeval Christian culture.  However, there were at that time important, reciprocally influential relationships across the Arab and Christian world in the fields of scientific and philosophical output: the Arabic contribution by the 12th century had become to all intents and purposes a part of western culture and scientific knowledge.

So Dante knew something about the great Islamic philosophers and scientists, in particular Avicenna and Averroes whom the poet places in canto IV of Hell amongst the ancient wise spirits of Limbo.  Avicenna (ibn Sīnā), who straddled the 11th and 12th centuries, was a Persian doctor, philosopher and the author of important works in Arabic amongst which was a famous canon of medicine (al Qānūn fi l-tibb); Averroes, whom Dante called Averois,

[1] was a great Arab philosopher from Cordoba who lived in the 12th century and was author of a famous commentary on Aristotle, but was also a doctor, judge, astronomer and mathematician. 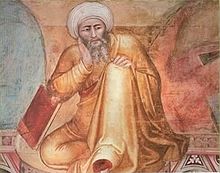 The relationships between Arab and western science were always very close.  And it was not by chance that Dante links in the same tercet (Hell, IV, 142-144) the names of Avicenna and Averroes to those of four great scientists of the ancient Greek and Hellenic civilisation: the two fathers of medicine, Hippocrates and Galen, the mathematician, Euclid, and the geographer and astronomer, Ptolemy.

All the more so that – a curious enough fact – the work on astronomy by Ptolemy, born in Egypt and busy in Alexandria between 120 and 150 A.D., was first published in the Arab world and only reached Europe later on in the middle ages under the Arabic title of Almagesto,[2] in a shortened version written in Arabic in the 9th century by the astronomer al-Fargānī of Persian origin.  This Arabic shortened version was then translated into Latin by Gherardo of Cremona in the 12th century and was very probably used by Dante as a manual of astronomy.[3]

There follows the translation of the same tercet into Arabic by Hassan Osman:

We also reproduce the notes by the Arabic translator of the three above verses: 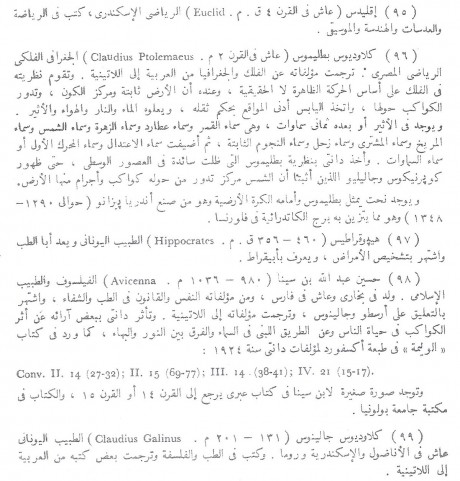 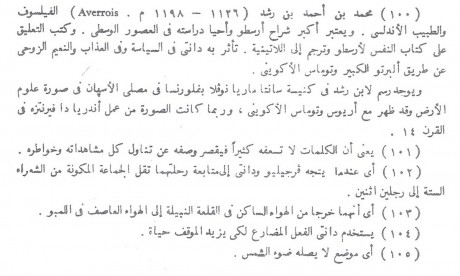 And here is how Allen Mandelbaum has translated this tercet into English:

and Euclid the geometer, and Ptolemy,
Hippocrates and Galen, Avicenna,
Averroës, of the great Commentary.