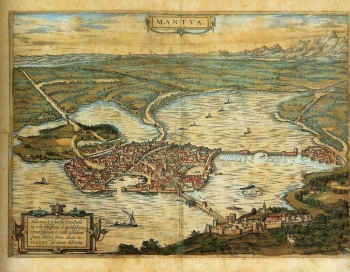 By virtue of being Virgil’s homeland the city of Mantua has a very particular importance in the Divine Comedy.  The great Latin poet had strong ties to his place of origin, or at least Dante thought so.  The fact is that Virgil mentions Mantua several times in the course of his journey across Hell and Purgatory.  He does so at the beginning as soon as he meets Dante in the dark wood at which time he introduces himself as a Mantuan and a son of Mantuan parents (Hell, I, 68-69).  He does so once again shortly afterwards when he tells him how he realised that, in the service imposed on him by Beatrice, she had turned to him calling him “courteous Mantuan soul” (Hell, II, 58).  He does so in Purgatory when he meets his compatriot, Sordello, who embraces him emotionally as soon as Virgil utters the name of their common city (Purgatory, VI, 70-75). 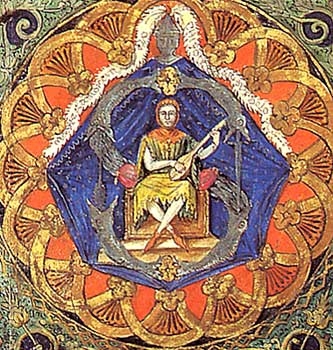 But there is a moment when Virgil discusses the origin of the city of Mantua with Dante after having spent some time on a detailed description of the geography of the surrounding areas.  The occasion is the date of the meeting of the two poets with the priestess and Theban seer, Manto, (a daughter of the art insofar as she was the daughter of the seer, Tiresia) in the fourth pit of the eighth circle of Hell, a pit indeed which was for the soothsayers, condemned to having their heads turned backwards so that the tears they shed run down their spines.

Virgil points out the virgin priestess, Manto, to Dante telling him that after her father’s death and the fall of Thebes under the rule of the tyrant, Creonte, she  had gone on a long pilgrimage in search of a quiet, lonely place.  In this way she arrived in Italy and reached the place which subsequently would become Mantua along the river Mincio, exactly where the waters of the river reach a depression in the ground and turn into a swamp (Hell, XX, 52-81).

Manto had stopped here and had lived until her death after which others after her had come together in that place and had founded a city which they had named Mantua after her (Hell, XX, 82-93):

Verses which are translated fairly freely into the Mantuan dialect

And this is how the same verses sound in the translation into English done by Henry Francis Cary:

Hence journeying, the savage maiden saw
‘Midst of the fen a territory waste
And naked of inhabitants. To shun
All human converse, here she with her slaves
Plying her arts remain’d, and liv’d, and left
Her body tenantless. Thenceforth the tribes,
Who round were scatter’d, gath’ring to that place
Assembled; for its strength was great, enclos’d
On all parts by the fen. On those dead bones
They rear’d themselves a city, for her sake,
Calling it Mantua, who first chose the spot,
Nor ask’d another omen for the name…

[1] In De Vulgari Eloquentia (I, XV,2) Dante dwells on the dialect  spoken in Mantua in his time which he considers akin to those spoken in Cremona, Brescia and Verona.  This  consideration agrees with the conclusions of the most recent research into dialect which recognises features in old Mantuan which are common to the speech of east Lombardy and Verona, “while subsequently this evolved towards a frankly Emilian one” (Pier Vincenzo Mengaldo in Enciclopedia Dantesca, vol. III, p. 813).  As for modern Mantuan, it deserves to be used for a serious version of the Divine Comedy since the existing ones, besides being partial and very freely translated, resemble parodies more than real translations of the poem. 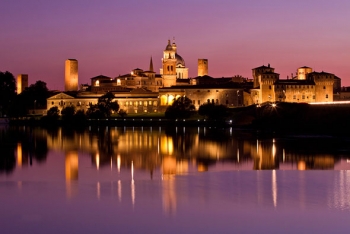