Home/The novelties of the month/Dante’s Ulysses, symbol of human nobility 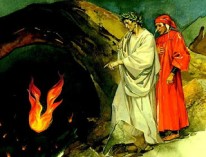 The person of Ulysses towers over the other damned souls of Malebolge, the dreadful ditches of the eighth circle of Hell where fraudsters are punished.  Some commentators have observed that the Greek hero would, if he were not guilty of the deceit of the Trojan horse, belong to the world which suited him better of the lofty noble spirits of Limbo.

Moreover, since ancient times there have been many who have seen in Ulysses the incarnation of virtue and wisdom, the highminded hero who nobly and bravely follows the path of knowledge.

Click here to read the whole article and listen to the reading of the relevant verses.