At the death of Genghis Khan (1227) the Mongol empire created by him, which included the territory of present day Kazakhstan, was divided into four khanates, the number of the children of the great emperor.  The whole of the northern flank of modern Kazakhstan, at the time half desert, became part of the khanate of the Golden Horde, while the southern flank, where the ancient Kazakh cities of Taraz, Turkestan and Shymkent were to be found, became part of the Chagatai khanate, named thus after the second son of the late emperor to which central Asia had been assigned, including that territory.

This geopolitical situation remained substantially unaltered during the following decades and throughout the whole of Dante’s life.  At that time the citty of Almaty (or Alma-Ata, the future historic capital of Kazakhstan) did not exist, but the capital of the Chagatai khanate was then the city of Almalik 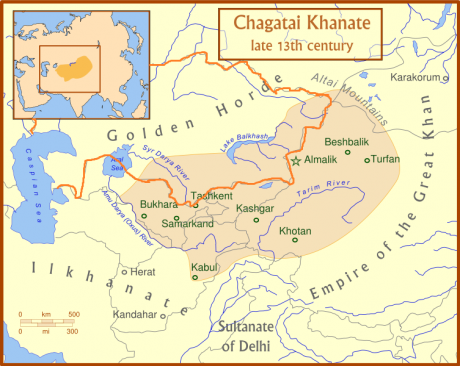